A few weeks ago a friend asked about the dialect of Dutch spoken in Brabant. Of which there are multiple varieties. What the street spoke outside our house was a bit of a mess, as there are several isoglosses that fall right where Valkenswaard is located, meaning at it's simplest that the local language was somewhere between Antwerpian (Western Netherlandish) and Limburgian (Eastern Netherlandish). But included words that derived from other places, as the natives had, historically, been travelling traders and small craftsmen who ranged very far abroad between the planting and harvest seasons. Additionally, local industry, when it finally developed, was dependent on materials and products from elsewhere, including the tropics.

Thank providence for the national literary language. As represented in comic strips, novels, and the newspapers. Not in poetry, because although there is a huge amount of Dutch poetry, it sometimes seems that every versifier has invented his own version of the language.

My mother, who had three master's degrees in dead languages from Berkeley, spoke Dutch badly and often relied on English. Her circle was the more limited for it.
She had given up on intelligent life in Brabant.

I'm not sure that local languages are really worth protecting. Given that, insofar as they have an "educated" vocabulary, it is often if not always a backformation from the national language, all words with a "new" old pronunciation according to recognized sounds shifts. Which is quite artificial. As was demonstrated by the comments underneath an article in a Limburgian paper years ago in which the author argued that there was no such thing as a Limburgian language. The readers disagreed, at inordinate length (five hundred plus responses), proving by their attempts to write what they thought was Limburgian that in fact he was entirely right; village gibberish with predictable coinages.

Is there really any value to not being able to communicate effectively with someone from ten miles away when all you would talk about anyway is horse dung, cow pastures, and the price of coal? Wouldn't your inane and superficial thoughts be better expressed if more people could make sense out of them? 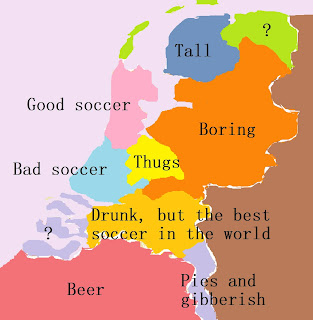 Cultural map of Mordor
Having said that, you will understand that I warmly encourage the people in Great Britain to finally, after all these centuries, learn English, so that their moronic thoughts about bogs in Yorkshire and doggerel by Bobby Burns are available to a wider audience.
Same goes double for New York and Philadelphia.
All of you sound like gumbies.
Ooh arrrr.

By the way: the closest thing to a "Yorkshire Pizza" is standardized toppings on a crust made from Yorshire pudding dough. Which I damned well refuse to even consider. It's very American. What the heck is wrong with you?