A LARGE NUMBER OF MELANIN-IMPOVERISHED INDIVIDUALS

What most of my fellow Caucasians don't seem willing to grasp is that even with vaccination, even with the low transmission rates in the Bay Area, and even with improved treatment and more targeted medical treatment options, the disease is still a factor, and it would be a polite consideration toward their under twelve fellow citizens, infants, older people, temperamental Dutch Americans, and the immun-o-compromised, to wear masks, and to wear the damned things over their noses.

Yesterday, between leaving the house for groceries and lunch, I counted over three hundred Caucasians either without masks entirely, or with orifices open to the air.
Bunch of damned glow-in-the-dark dumbasses.

As you will understand, I cannot put exactly what I think of that on Facebook. Mark Zuckerberg would have conniptions. And we can't have that. Even the diplomatic rephrasing of my sentiment would be suspect, and excite his artificial intelligence droids.


"Some melanin-impoverished persons may be problem solving ability and comprehension compromised aggregations of equine excreta."

Enjoyed my lunch immensely in a capacious restaurant, no other white people there, with plenty of distance between myself and the customers at different tables.

A ragout of dragon tongue fish and tomatoes over rice ('faaan ke lung lei wui faan').
Dawdled quite a while over my tea, drinking in the peacefulness of it all.
Smoked some Samuel Gawith Best Brown Flake afterwards. 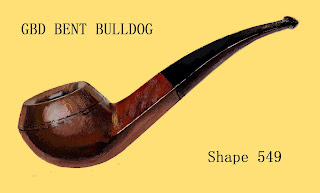 It's a tobacco product that I'm particularly fond of; when it sings, it sings. Yesterday it sang. The pipe is something I bought from Marty Pulvers at Sherlock's Haven nearly two decades ago, which I haven't smoked very much in the last three years, don't know why.
An older GBD Virgin, classic bent bulldog shape.

It was the kind of leisurely interval which makes Autumn more golden. Despite the very many visiting melanin-impoverished problem solving ability and comprehension compromised aggregations of equine excreta wandering around.