Lord Bao (包公 'baau gung', actual name 包拯 'baau ching'; 999 to 1062 common era) was a famous magistrate and administrator during the Song dynasty (宋朝 'sung chiu'; 960 to 1279) known for his honesty, probity, and uncompromising ethics. In the centuries since then he has been the hero of operas and tales of valour.

What probably is true is that he stopped the practise of collecting extra tribute inkstones in the second district to which he was appointed (天長 'tin cheung' in Anhui 安徽 'ngon fai' ), was a key mover in the impeachment of Zhang Yaozuo (張堯佐 'cheung yiu jor'), who was an uncle of the favourite imperial concubine, and straightened out the civil administration of Kaifeng (開封 'hoi fung'), which had been corrupted by local gentry to a rare-thee-well. 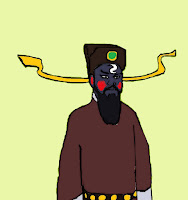 In stage performances he is usually played with a dark face and a swirly pale birthmark on his forehead. This is partly so the people in the penny seats can spot him from their great distance, partly because he was an ugly man.

While in Duanzhou ( 端州 'duen jau') he wrote the following poem:


Honesty is a requirement for firm action,
The straight path is a life-long plan;
An elegant tree trunk becomes a pillar,
Refined steel is not used for mere hooks.
Mice and sparrows rejoice when the granaries are filled,
When the grasslands wither rabbits and foxes grieve;
The annals contain guidance from the past,
Do not leave shame for your descendants.


I was revisiting some old stuff this morning, hence this post.

Tribute ink stones: Stone dishes or slabs, often carved elegantly, are used for rubbing out sticks of ink with water for writing. Some types of stone are especially prized for their texture, and exceptionally fine specimens were sent to the court regularly as a form of tax from certain districts. In Tian Zhang local administrators collected far more of these than were required to use as gifts to officials whose good favour they desired. This was, of course, more than just petty corruption.

Note: the name of this essay is more or less a translation of Judge Bao's name. Bao (包 'baau') means wrap up, bundle, bag, packet, and bun. Zheng (拯 'ching') means raise, uplift, aid, assist, save. To a food conscious man, "bun raise" naturally springs to mind.
I apologize, no disrespect was intended.