Because of a little tiff with the Commissars of the Standards Directorate over at FeeBee, it has become necessary to create another person. Not, as you might think, in a lab with shiny steel surfaces everywhere, humming equipment, and wires -- no pickled brain labelled 'Abby Normal' was harmed -- but in the virtual world, on a laptop. A man wants to maintain some semblance of contact with his saner friends, in order to hold on to his mental equilibrium.


Invitations for linkage were sent out.


Quote:
"What have you done with the real Xxxxxx Xxxxxx!! You are a space alien who who has taken over his body like a bad sci fi film from the 1950s. Doubtless you came to earth attached to Z*ck's xxxxx-xxxxxx rocket re-entering the atmosphere."
End quote. 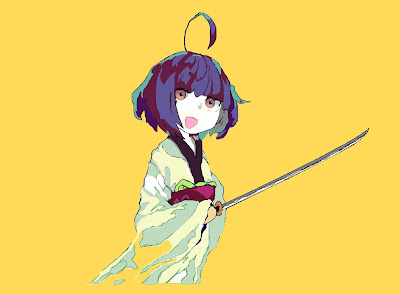 This ulterior ego is a self-assured younger woman. As any sane man's other self would be.
Because the alternative is supporting the patriarchy, buying into traditional flesh-based gender and age roles, as well as eating sh*tty junkfood from popular chains.
She's also a wraith-like chaos-spirit floating around in dreams, shadows, nightmares, midnight terrors, and burgled crypts. But in a good way.

Meta is just the beginning.


The "avatar" above is based on Kiritan AI, a vocaloid from a Japanese Company, whose older sister likes a green-soybean paste confection, which is a Tohoku specialty.


All iterations of me like bean-paste snackies, sambal, and milk-tea.
So it seemed appropriate, don't you think?

I fondly imagine that this is precisely how people picture me when they read my posts here and on FeeBee. Surely there is a "nice" person with AWESOME sword-skills somewhere near Hang Ah, Spofford, and Ross alleys, or Waverly Place, smoking her pipe, and minding her own business, undisturbed by the world, around tea-time, on a regular basis?

By the way: the briar pipe shown above is "the pipe for watching rats in Spofford Alley". It's so named because four years ago, when San Francisco decided that rather than doing anything really meaningful for an economically depressed area, the most constructive thing to do was to beautify a street for the tourists and leave a long hole in the ground for almost two years, thus providing a paradise for rodents. Once every week late at night I would have a contemplative smoke observing the wildlife before meeting a friend later. The rats are all gone now, because although a giant trench might be good, not having plague spreading in an ethnic enclave is even better. The tourists probably appreciate that.

From Uncle van der Pervert to Kiritan AI is a long, strange trip indeed. After Lord Zuck rescinds your banishment, perhaps you might keep both personae on FB to confound your foes and delight your friends...
M

That's the intent. And remember, Uncle van der Pervert is likely to say things that Zookie won't like.