Normally some things are far from my mind, but there is a disturbance in the force. One of my friends posted a picture of the Fellowship of the Ring gathered around a table, cheerily feasting (remarkable that Gollum wasn't in the picture - perhaps hiding under the table like many shy people often do), and for some reason I sense that Esoterica pipe tobacco is once again exciting the tiny little minds of fussy neurotics everywhere.

Note for the uninitiated: Esoterica is a brand of pipe tobacco. Pipe tobacco bores everyone to tears except pipe smokers, so it won't be mentioned in much detail till the end of this post (no need for your eyes to glaze over yet), and while I appreciate what Germain and Son in Jersey in the Channel Islands manufacture, it does not make me cream in my silken panties, unlike very many people I know. I have plenty of it stashed away, and I haven't opened a new tin in years. For some people, good pipe tobacco is a tool that makes a cup of tea special, a holiday movie more romantic and twee, their pet hamsters more adorable and pretty, and the coming of Jayzus likely. Their little piggy eyes light up at the prospect of a shipment of Esoterica.
They go quite ancient daemon creature obsessive. 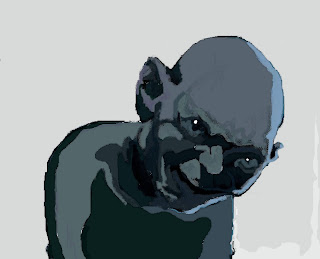 YOUNG VULCAN SPOCK GOING TOTALLY APE-SHIT AND ALL GOO-EYED AT THE
PROSPECT OF MORE ESOTERICA TOBACCIANA ARRIVING SOON AT THE LOCAL
'DEAD LEAVES (AND KRATOM) DEPOSITORY'; IT'S ALL MINE, BITCHES! MINE!
An embodiment of alien horror.
Star Wars convention.
Hobbitses.


It is remarkable how often holiday illustrations and imagery show a pipe smoker somewhere in the background, as if grandpa and his briar are a good thing and universally appreciated. The harsh reality of course is that the glandered old fossil (or the misguided hipster imitating him) are chased out into the cold to shiver and freeze, while the rest of the family gathers around the fire to discuss the inheritance after he dies of pneumonia or the plague. Perhaps they'll cut him up and distribute his body parts to the poor among the local werewolves. Santa smoked a pipe. Gandalf smoked a pipe. Clark Gable and Albert Einstein did also. Even those nasty hobbitses smoked pipes. As well as the imitative hipsters stockpiling rare pipe tobaccos and speaking knowledgeably about Edgeworth Slices and its faint hint of shoe leathers and lilac, quelle saveur authentique, as if they were actually alive back then. In the stone age.

Out into the arctic chill, all of you stinky reprobates!

All in all, I am not fond of people who can only speak at length about one subject: football fans, religious people, craft beer aficionados, tobacco connoisseurs, trekkies, LOTR nuts, cigar smokers, anti-smokers, snuff box collectors, anti-vaxxers, Qanonites, and vegans.

I am far fonder of people who speak of pastries, condiments, tea, and stuffed animals.

It is hard to find those people in an appreciable number.

A very sad state of affairs.


For your information, after having an early tea in Chinatown later, I shall wander around a bit with a pipe in my mouth. as I often do. It's a contemplative thing. The light will be more golden for a while. Vegetables will have been purchased, along with some more condiments.

ESOTERICA – BLACKPOOL
Aromatic. Dark-stoved with a remarkable bright flavour. Virginias top-dressed with a hint of licorice/anise. It offers a thick, creamy smoke, reduces to nearly nothing.
Black, mildly fruity.

[Note: smoked both Dorchester and Dunbar during Autumn and Winter in the second to last year that I worked at the toy company. Because of a huge gaping hole in my love life I hid out at the office on weekends, and wandered the alleys of Chinatown and the Financial District after a late lunch. These were extremely comforting then. The rains did not come until sometime in January, the air was still, light fog in the evening.]

ESOTERICA – HASTINGS
Aromatic. A complex blend of Virginias with a fruity berry-like topping, possibly apricot brandy. Ready rubbed. Really mellow and really smooth.Dark, fruity, leathery. The Virginias sing, the fruity topping is traditional and boozy. It is deep, and may convert you.
Possibly too simple for a complex man.

ESOTERICA – MARGATE
The classic full English. Lighter than Germain's Latakia Mixture, comparable to Balkan Sobranie. Mouth filling. Delightful, rich and reeky.
This will piss off the non-smokers like nothing else.
The quintessence of Latakia smokes.

ESOTERICA – PENZANCE
Latakia, Turkish, Virginias, all pressed and steamed into brindled flakes. Very reminiscent of the old Bengal Slices and various excellent products from G. L. Pease. This has become a cult tobacco, and occurs on every damned “must-try list”.

Penzance goes very well with a glass of sherry late at night. I am baffled by the adulation it receives, though. It is good. But personally I find this less than mid-expanding, and surely there are few insomniacs living out in the industrial area where the freight trains keep them up late on summer evenings? It will keep the mosquitoes away.

ESOTERICA – RAMSGATE
Aromatic. Virginias steam-pressed till black. Topped with licorice. Possessed of great character, yet sweet and mellow, and easy to like. Broken flake.
This will get you kicked out of The Occidental by Curtis, who abhors anything aromatic.

ESOTERICA – ST. IVES
Virginias, black cavendish, Turkish, and Latakia. Aromatic.
A darkish peculiarity with fruit. Slightly citrussy, slightly floral, slightly smoky. On the milder side, and will probably appeal to Texans. Tastes like old lady. The Virginia could have better company. Goes well with Bourbon. I avoid American whiskeys.

ESOTERICA – SCARBOROUGH
Virginias.
Complex, beguiling, of variegated appearance. Rich and smooth. Very flavourful. Because of aging, it presents a slightly spicy note. Probably not suitable for the very young. Excellent.

ESOTERICA – STONEHAVEN
Virginias and air-cured leaf steampressed. A very English product. A broken leaf for old-codgers, but a surprising number of young men are old-codgers. I could have done with less Burley. Shows up on every “must-try list”.

ESOTERICA – TILBURY
Virginias with a touch of air-cured. Light and buttery. With a plum-like Virginia sweetness. Top notch. Noticeable nicotine.
I recommend this highly.

ESOTERICA – WOODBRIDGE
Aromatic. Several flue-cured tobaccos. Brights somewhat dominant. Mottled and shaggy of appearance. Fruits and anise / licorice. Hay, citrus. Not fruity enough for most Americans. The hobbits like this one.

GERMAIN AND SON – CLUB MIXTURE
Two types of cavendish with red and bright Virginias.
Smoked a tin of this a few years ago. Which I enjoyed, but it was not exceptional and I didn't take notes. Can't remember much about it. Unremarkable.

GERMAIN AND SON – BROWN FLAKE
Medium Virginias aged and pressed.
I fondly remember this, and I have a few tins stashed. A mild and ethereal sweetness combined with a fuller note deeper in the bowl. Damned fine tobacco.

GERMAIN AND SON – MEDIUM FLAKE
Straight Virginias. Cut seems to be variable, everything from actual sheets of pressed tobacco to raggedy strips, even a semi-ribbon, depending on production date. Sweet, citrussy, grass and hay. Plums. It's a very lightly topped product, but you might not thinks so.
Very good, for old codgers.

GERMAIN AND SON – PLUMCAKE MIXTURE
Virginias, cavendish, dark steam pressed Virginias.
This one is peculiar; the topping is odd. That said, I enjoyed smoking it on breaks out near the freight platforms next to the train tracks in the months after we moved the company to an industrial area on the other side of the bay. A long lovely sun-drenched Autumn.

GERMAIN AND SON – RICH DARK DARK FLAKE
Virginia and Burley, hot pressed and topped.
Very similar to Stonehaven, but it hasn't achieved cult status; people aren't killing each other yet. It's a good product, but like many darker presses veers toward monochromatic.
Long dark strips, topped and sweetened. Full and creamy.

GERMAIN AND SON – ROYAL LATAKIA MIXTURE
Latakia, Virginia. Subtly augmented.
An extremely enjoyable rainy day mixture which smells old-fashioned and will likely trigger all of your relatives. My nearest relatives live in Calgary, and although they are firm anti-smokers, they cannot smell it from here, unlike the good people of Berkeley. Who can.
I feel their karmic pain across the Bay in San Francisco.

GERMAIN AND SON – ROYAL PERIQUE MIXTURE
Virginias (English "Cavendish") with Perique.
Delicate, medium strength, lightly spicy. Complex and very enjoyable. An extremely well thought out ribbonish compound, which I had far more of stashed away once.
Truly an exceptional product.

GERMAIN AND SON – SPECIAL LATAKIA FLAKE
Mostly Latakia leaf, some other tobaccos, pressed and milded, cut into raggedy flakes.
This was an interesting and enjoyable smoke. But be prepared to either rub out the entire tin for drying a bit and then jarring, or go through all of it over a few days. Otherwise you'll return to the opened tin a few weeks later and find the rest of it moldy. The Latakia is dominant, there's enough other stuff to round out the flavour and no more. Rich, smooth, and smoky.
It can be intoxicating, or sometimes an overload of goodness.

There are other Germains tobaccos, I haven't smoked all of them.
Nowadays they are hard to find. That wasn't always so.
When a shipment arrives the news gets around.
Fans go crazy and it disappears.