Sometimes golden retrievers are fun to be around for a while. Until they've downed too many pints and go outside and tip over the parked motorbikes. French bull dogs simply weep into their martinis, while poodles light up cigarette after cigarette and insist on discussing Sartre and Marx, with occasional forays into the Marquis de Sade and Anaïs Nin. They are never drunk, always the 'superior' faux intellectual. And chihuahuas simply get belligerent, as if they're hepped on cocaine all the time. Tense and vicious little drug fiends.

We don't have any ditzy blondes in the building, but yesterday I ran into a chihuahua. I think it stays with one of the gay guys, a couple, who live upstairs. It's a nasty piece of work. Can't put two words together to save its life, just stands there growling in that horrid fashion they have.
I hope it mostly dwells in the apartment a block over, in their other digs.

It strikes me that if you want an animal living with you, you could do far worse than to invite in an elderly rabbit, with proper gentlemanly habits. And relatively civilized taste in pipe tobaccos, something stolid and English, Robert McConnell Original Rich Dark Virginia, or Fribourg & Treyer Special Brown Flake. 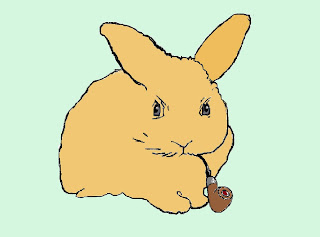 Maybe a secret fondness for tablet (a type of sugar-milk candy slightly firmer than fudge, sold in Scottish toffee shops, often flavoured with whisky and walnuts), which it nibbles during tea time. Before lighting up again and glowering at the cat.

He knows what the cat did. And he's properly horrified. It's just not nice to take the golden retriever down to the pub, the poor beast can't help himself, he's basically a slobbering alcoholic frat boy, and never knows when to stop. Getting him drunk just to get him in trouble with the bikers whose machines he damaged and the cops who had to chase him for blocks in that obese person's heavy duty mobility scooter he hijacked was just cruel.


When he isn't drinking, the golden retriever is the nicest fellow. Harmless, with a ready smile for everybody. Now chihuahuas, on the other hand..... Angry little psychopaths, wired to the gills.


The advantage of rabbits is that they don't bark, can hold their liquour pretty well, and never quote Sartre. They might sneer at animals that do. Pretentious French git.

Kindly do not piss off the rabbit.