What originally caught my eye was the toko (on the right, near distance). For a dislocated Dutchman, a toko (Indonesian grocery store or general store) is a magnet. Because, of course, if nothing else, there are sambals, spekkoek, and neon-coloured sodas on the premises.

Also very likely speakers of Bahasa Indonesia, but that spans a vast gamut of peoples and differences. There are tokos all over the Netherlands; there were at least three of them in Valkenswaard when I returned to the United States, and when I visited my father in Eindhoven before he passed away, I found one in the nearby winkelcentrum, where I purchased several sambals. Despite having lived for several years in the tropics, my father's wife had not been bitten by the sambal bug. Food at their house lacked a certain oomph.

Whenever I travel to Europe, I bring along sambal.
English food is milder than Dutch food.
And sambal aids digestion. 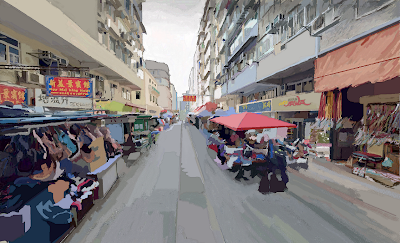 In Hong Kong, a toko does not really cater to the exiled 'Ollander, but to the Indonesian and Indonesian Chinese individual, resettled, sometimes permanently. Many Hokkiens left the Indies during various waves of anti-Chinese agitation and discrimination.
Some have lived in HK for generations.

Still, a toko also indicates that guleh, kurma, satay, and soto can probably be found not too far off. Ayam kuning, babi panggang, and various spicy salty sour sweet noodle dishes.
And a strong cup of coffee afterwards.

Probably not the typical Dutch cigar; that taste is not universal.
Genever? Maybe not. Not likely in any case.


I'm rather obsessive. I got so absorbed in adding to this painting that I smoked three pipes without even thinking. Missed out on serious enjoyment because of it.
I think it was Astleys 109 for two of those bowls.

Anyhow, it's later than I expected now. I should shower and get dressed, there's stuff I need to buy in Chinatown, and I need something to eat. I'll smoke another pipe afterwards.