When someone asked where the frazzled meat was (and did they have any?) I answered that they did, it was in that aisle there, and pointed. Another person then said that she didn't want frazzled meat, thinking that I had addressed her, as she had also asked about something, so I clarified that I was addressing the first person's query. What was unusual was not that none of this was in English, but that I actually knew where the product was in a store that carries absolutely everything in the world. Reason being that I myself was purchasing some. 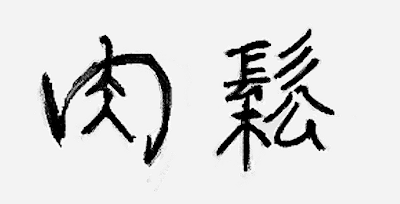 Frazzled meat (肉鬆 'yiuk sung') is sometimes used as an ingredient in serundeng, which more commonly is made with grated coconut with the addition of either roasted peanuts and spices or seaweed and spices, for a topping on curries, rice porridge, stews, baked goods, etcetera. Sometimes simply eaten out of hand.

The meat is simmered to the point where it can be easily pulled apart, after which it is either pan-toasted or oven-dried until nearly moisture-free. At which point it is storable.
A very useful item in your larder.

Indonesian variants (abon) may be prepared using tamarind water or thinned coconut milk as the cooking liquid; these also can be further reduced for addition to dishes. The Chinese and Vietnamese versions use a sweetened soy sauce broth with a little five spice.

Usually, in Chinese cooking, frazzled meat is strewn on top of congee.

Or as a light lunch.

I rarely buy it. I am not a breakfast eater. Before the pandemic I would occasionally go down to Chinatown and have some congee (粥 'juk') as an early lunch, with an oil stick (油條 'yau tiu'), at a place where I like the family that runs it, but the actual idea of having the first meal of the day with one's first coffee and before taking a walk, smoking, shaving, washing, and fully waking up is not appealing.
A man should grumble, creak, and grunt early in the morning, while sipping a black liquid, and then go out for a pipe. The circulation must be brought up to speed gradually; forcing the system into overdrive with food is violence.


That is, in fact, what I have just done. I may go over to Stockton Street for some congee.
I might get to sit inside while enjoying it.
Which would be nice.
Later.