Unremarkably, I haven't taken a taxi in over a year. Not because I've massively jumped on the Uber or Lyft bandwagon, but because I've not been in a rush, nor hiking home after a night out with the boys celebrating someone's promotion at the investment firm to chief executive's dingus with a coke-snorting stripper named Candee. It's has been a long time since I celebrated promotions or Candee's ecdysiastic talent. A very long time. Never.

While cognizant of missed opportunities in the celebration department, I am relieved that my past life, if it ever catches up to me, will be pleasingly uncompromising.

And this being San Francisco, Candee is probably from Texas, had a horrible youth with an abusive Christian family in a trailer park, and is damned glad he got out alive.
He feels liberated now, and has ditched religion.
A body builder bellydancing Tarzan.
Sparkly blue g-string.

Yeah, um. Got distracted by the concept there for a second. Sorry.


My friend the bookseller still remembers the time I was hollering "dekista" at two thirty in the morning, after we strolled out of our usual once-a-week disreputable dive and I didn't want to walk over the hill. Various languages had been spoken there, and as you know I am not monolingually inclined, so the over-excited brain was still firing synapses at moving targets in the cold night air. The word I was looking for ('taxi') got mangled on the way out.
Dekista is not taxi in any human tongue.
One shortly arrived. 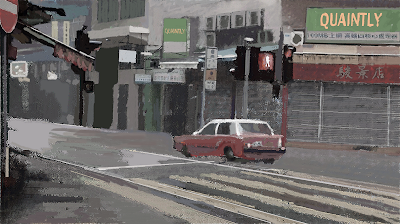 You cannot get to your hotel on Tsing Yi Island (青衣) from anywhere here by taxi. Even if it's raining, such as in the illustration above, about the shades of grey of which I was obsessive last night till long after twelve. When I stepped out for a last smoke, there was a fine drizzle descending and I had to stay near buildings so as not to get moisture on my pipe.

The neighborhood had quieted down a bit, the bars were shut, and even the crazy people had disappeared. There were a few skeevy types lurking in doorways, but nobody risked getting whacked with my blackthorn (the equivalent of a knobkerrie while wandering the wilds of SF). Somebody I had spoken with earlier was robbed two blocks from my front door, so things are stranger in this area since last year.

Middle of the night snack: Cheddar Cheese Puff Sandwich crackers ("biskut sandwic dengan krim keju cheddar") manufactured by a company in Alor Gajah, Melaka. Tropical packaging. Each tasty item individually sealed. Can't go bad in a hot humid environment. It's safe to consume even if it has rained for weeks and everything is moldy or mildewed.
Maybe I shouldn't have had that final cup of tea.
Synapses.