The apartment mate called in sick today. Which meant that I was contemplatively scratching the area of my left kidney when she was on the phone with an office answering machine. Then another one. And then voicing for the turkey vulture (who wants to eat the little girl hamster). Who, I think, will be in trouble most of the day because he's incorrigible and will push envelopes that should not be pushed. Ever.

She's presently asleep in her room hugging an octopus. 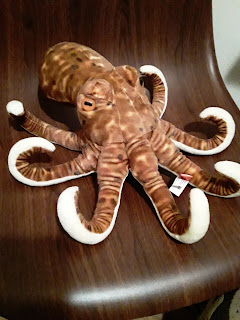 Otto
Otto is a remarkably decent fellow, as well as often a voice of reason when things might get out of hand. He lends his moral support to the saner creatures whenever the turkey vulture or the unstable elements on my side try to pull some evil shiznit. No, I cannot figure out why the beasts who live in my quarters seem to be, mostly, insane little anarchists.


Fortunately, very few of them are effective criminals or delinquents.

Which means that I can safely leave during the day without fear that they will burn the building down while I'm away. As indeed I must often be, when the apartment mate is not at work (her and my schedules do not overlap in that regard), as my apartment mate's crucial flaw is that she is a non-smoker, who has allergies worsened by tobacco. Of course when she's away during the day I close her door, open all the windows, and light up. Three or four hours of ventilation plus a pot of muck on the stove chase out all traces of it, and with the kitchen window open at all times, I am reasonably safe. 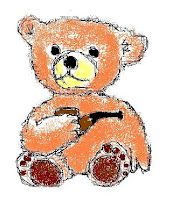 A pipe smoker
The fuzzy roommates largely support me in this. They figure that if they cover for me, I'll do the same for them, and won't rat them out when they ponce around in her pearls or pajama top.
So today they are a little disappointed. No scope for revelry and out-of-hand behaviours.


Everyone except the turkey vulture, that is.
He'll keep trying to get away with stuff.
He's quite brazen about it too. 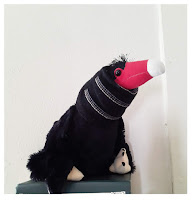 Political dissident
The turkey vulture intensely dislikes the octopus. As, naturally, anarchists and rebels always oppose the side of common sense and stability, or rowdy kids feel an urge to trash the classroom when the teacher steps out for a brief mental breakdown.


I shall be stepping out a third time for a stroll soon, with a pipe filled with Cornell & Diehl's 'Red Carpet'. The weather is pleasant, and I should head down to Chinatown for groceries later, before the afternoon wind picks up.

[RED CARPET: an enjoyable broken flake of Red Virginia and a little Perique, of medium strength and pleasing complexity. Earthy, tangy, slightly spicy. It's something that will age very well.  I would recommend it to the nephrologist who was totally heartbroken when McClelland closed down, but I haven't seen him in ages, and I don't like him very much in any case, so it's fine if he remains frustrated and bent out for a few more years.]

Tomorrow I'll reward Otto (the cephalopod) with a cigar for keeping an eye on the unstable elements. Eight dextrous arms covered with suckers are perfect for restraining them when absolutely necessary, but most of the time they are hoisted by their own petards.