In a development that can only ire sensible people, the animatronic midget from last year will return for another season of Sci-Fi cutesy-poo. I know my friend John O. in Georgia had hoped we saw the last of him last year, along with the orange troll and the evil witch, but nope, sorry, we're doomed. The last two mentioned aren't in the news anymore, which leaves the stage entirely free for Disneyesque overload. 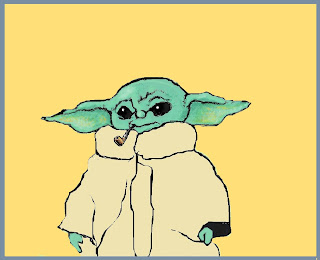 It's like a cat crossed with a teenage juvenile delinquent. Except instead of huffing marijuana and magic mushrooms, this one snarfs the eggs of endangered species, single-handedly setting back interplanetary environmental protection by half a century.

Game of Thrones was bad enough. Though it ended well. I never watched it.
This space toddler saga, through the horrid memes, was a nightmare.
The internet was awash with his infantile smarm.


I would probably have been scarred for life, if I watched the show.


He eats too much, dresses funny, and smells bad.
Probably smokes Captain Black Grape.
The precious, the precious.