Lunch today was something most urban Netherlanders would vaguely recognize, as would also many Indonesians, and none of them would prepare it the same way: Bami (肉麵). Which is not a dish but an ingredient, thick wheat noodles made with egg, often panfried. The most common Dutch version has them panfried with chilipaste, sweet soy sauce, meat scraps, minced onions or scallions, and a fried egg on top. There are many Indonesian versions, often boiled, garnished different ways, cooked by street vendors. It isn't haute cuisine.

In this case it was lamb and fuzzy melon green curry with fresh chilies (in lieu of sambal) over the noodles. With a little garlic and ginger. There should have been a wedge of lime to squeeze over (kasturi or kalamunting, calamansi in Tagalog), but regular Yanqui limes for tequila would have done quite well. There was no lime. Nor lemon. Didn't fruss over it. It tasted fine.

Bami variously flavoured is something I associate with students at the technical university in Eindhoven as well as Dutch Marxists, though I wouldn't eat with the latter group nowadays.


For true blue Americans, it would probably be fine without strong spices or flavours, but instead bacon and ranch dressing added, or, in the Midwest, tomato ketchup. Maybe frank and beans. But I shan't speculate, because my exposure to American food preferences is limited, and broadest where it concerns Chinese restaurant white customers, or Taco Bell.

That said, I miss the hotdog and hamburger places that used to be everywhere in San Francisco, especially during the overlap in eras between unhealthy eating and Sriracha becoming popular. Obviously spiritual people do not eat sausages or ground beef, because of the bad karma involved, and I doubt that they ever touch Sriracha either.

There may be yoga-practitioners dining thoughtfully on kale and tofu all over the city now, getting nutrified in between chakra realignments and chiropractic sessions to cure their childhood traumas brought on by a bourgeois upbringing.
Not that there's anything wrong with that.
Om baby. 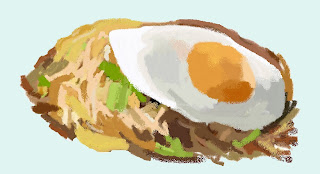 For some reason I cannot fathom, Dutch people like a fried egg on top of many things.
That may be why my apartment mate liked the place the times she's been there.


I didn't have a fried egg on top.
It was just me eating.
As usual.