A regional specialty, made with broad flat very long noodles and lots of red chilies. The dough, as near as I can ascertain, is a flexible wheat and water composition, slight amount of salt, which is pulled into broad belts after resting and rekneading, then further resting to proof before pulling. Two or three of such noodles, boiled, per serving, with some blanched greens (bokchoi and bean sprouts), plus crushed garlic, chives or scallions, a dash of dark vinegar and a dash of soy sauce. Followed by freshly crushed dried red chili dumped in a ladle with a little heated oil then immediately poured on top. Alternatively, the crushed red pepper is dumped on top first, then smoking oil (two or three tablespoons) is poured over. Mix, stir, ready. Basically a warm and spicy pasta salad, if you want to think of it as such.
The soy sauce, vinegar, and oil being a watery vinaigrette.
Biang Biang Noodles. 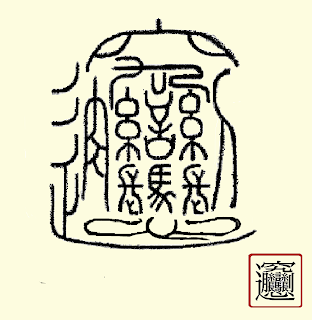 Biang Biang Noodles are not locally available. There are no Shensi farmers here, and no one makes that type of pasta. One of these days I will have to learn how to pull noodles, and look up an authentic recipe to experiment with, vary slightly, commit heresy upon.

There is no dictionary entry for 'biang'. It and its written forms were invented in 陝西 ('sim sai'; Shaanxi, Shensi) a few hundred years ago. There are many fancy stories explaining how the character came to be, but it more than likely represents the sound of the long noodles being slapped on the table while being pulled, smackity-smack. The noodles are wide and very long, which is why only two of them are needed for one serving.

There is no seal script version dating back to the bronze inscriptions or stone drums of antiquity either. But I'm a seal script nerd.

[In modern script it would be 62 strokes, probably in the 辶 section of a dictionary.]


A bowl of this would have been perfect on a frigid day such as today. Instead I went to a chachanteng and had comfort food. With lots of Sriracha hot sauce.
Probably just as good for the soul.