THE LOGISTICS OF CAKE

There is NO logical connection between coffee crunch cake and Kai Tak Airport. Except.
The most loved coffee crunch cake is made by a bakery in Chinatown, whose owners are Cantonese from South America. For two generations, the Filippinos down on Kearny Street, in what was then known as Manila Town patronized the place, and after the last vestige had been erased with the tearing down of the International Hotel, they and their children were still loyal customers. Some of the pilots who flew for Philippine Airlines had aunties all over the world. And a delicious cake from a distant place is, of course, a perfect pasalubong.

The plane should have arrived four hours earlier, but P.A.L. had a hard-earned reputation: plane ALWAYS late. And four hours is not that bad. My first trip to Manila was delayed an entire day. Which did not particularly surprise the folks who picked me up at the airport.

On this trip, someone in Kowloon was getting a coffee crunch cake. Courtesy of flight crew and pilot, and a designated on-board fridge. My involvement was limited to picking up the cake in San Francisco while temporarily back home.

So I picked up two: I had a personal interest in at least one of them getting to kowloon. 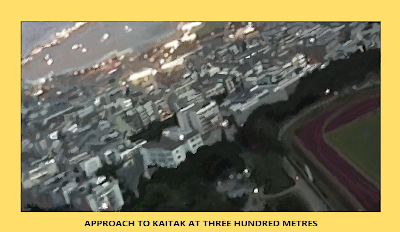 The steep turn and descent to runway 13 could give one palpitations.

Refrigerators with cakes are supposed to be completely level, or as nearly so as possible. This wasn't even close. I could imagine all kinds of damage.

The five pounds of Peets coffee were good. Beans are perfectly fine at a diagonal.
I just hoped they hadn't slammed down into the cake.
It would have been a pity.


The cake arrived okay.
I am a god.