Lunch requires literacy. Especially when one doesn't want to eat a sandwich. What I wanted was 豉椒排骨炒米 ('si jiu paai gwat chaau mai'), but they were out of 排骨 ('paai gwat'), so the waitress suggested 牛肉 ('ngau yiuk') as a reasonable substitute.
Which by all standards was more than acceptable.


They've only been open for slightly over a fortnight, but they seem to have their act well-together. It was crowded -- and Cantonese people in a crowd can be quite a handful -- and several tables were having an abundant good time. Which during the lunch hour is not so good, as they are then loathe to leave. Some of them required special treatment; the old gentleman who got called away shortly after he placed his order (and assured them he'd be back within ten or twenty minutes, which he was, and they had kept his table for him, so he'll undoubtedly be back), the old lady holding down a table for four (they had already eaten but her friends left to go buy groceries, and came back after a long wait), the table with six office types enjoying the food and company immensely (the woman in the right corner of the table talked a mile a minute, the man in the centre, aisle side, responded mostly in English, the left corner woman had opinions), and the salt of the earth thug bucket insisting on an entire fourtop for his glass of lemon tea. During. The. Lunch. Rush.

Myself, I'm an unassuming kwailo. I'm perfectly happy with a one chair table in the back.

And I'm still baffled how the waitress already knew of my fondness for bitter melon. 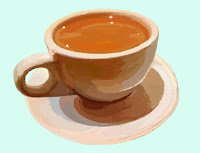 Lunch, despite the necessary lapse into English, was extremely enjoyable.
That was a delicious plate of chaau mai.
Next time, maybe bittermelon.