START THE DAY WITH DARK ARTS

Years ago this would not have happened. Back then, products had sensible names that suggested fine middle class values. Thompson's Gut Spackle, for instance, or Smithfelder Mushroom Enhancement. As used in many of the finest Midwestern households.

The rot started with Lord Of The Rings. As well as Sherlock Holmes.
Products deliberately calling forth an image of Hobbits.
Plus Baker Street and Persian slippers.

Because people are obsessive. And childish.
And have buckets of disposable income.

Personally, I think any products that radiate a fictional character image are too damned precious, and should be avoided. Mrs' Tiggy Winkles Mint Julep Mix. With a porcupine on the label. Eric The Red India Pale Ale. Sir Winston's Boot Blacking.


The above named product hides a ghastly aromatic tobacco concoction extremely popular among bearded gentlemen with piercings, tattoos, far too much male jewelry, and dubious personal habits. Precisely the kind of man who lives for Rennaisance Faires, Robin Hood Days, Pirate Festivals, and See Shanty Shenanigans. They own long churchwarden pipes, and wish they had been born during Victorian times.


So what can I say about a tobacco mixture named 'Plateau Of Leng'?
It's actually a very decent product, despite being described as compounded with a touch of madness, which may be a soupçon of Perique. In addition to Latakia and Turkish, with Virginias (including an unflavoured dark Cavendish) playing supporting roles. 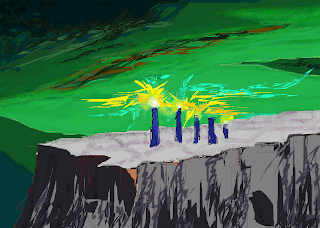 LENG: A GHASTLY UPLAND WHERE REALITY IS DIFFERENT

After the Latakia has kicked you around a bit, the flue-cured leaf starts providing an element of tangy fruitiness. This is a full-bodied smoke. Savoury. Smoky. Sweet. Fermenty.

The name is taken from Lovecraft's writings. There are foul miasmas there.
H. P. Lovecraft wrote lovingly of odious things, because he knew them.