One of my friends is a Republican who has spent time in Hong Kong and hates the commies. A number of other people with whom I am acquainted are also rightwingers (no, they are not friends), and several others are for various reasons opposed to Marxist ideology as well as fellow-travelers of the most reprehensible groups out there.
So naturally, I enjoy pissing them off. Most Americans don't know beans about communism, but because the Repubs have loudly screamed that anything even approaching a sensible healthcare system and a safety net, as well as sustainable wages, are all Communism! Communism! Communism! you will understand that triggering the poor dears is both delicious and a jolly good thing.

Once they all die of apoplexy the rest of us can go about building a better society.

There's a song that will further that noble aim. It will also upset the Taiwanese and the Falun gongists who through their odious propaganda mouthpieces (The World Journal and The Epoch Times) supported Trump and his scumbags, the mainland authorities who insist that they alone represent true social justice, as well as all those snooty Northerners who insist that 'everyone should speak Mandarin there are no other legitimate versions of Chinese like Cantonese, Min, or Shanghainese dammit those are just dialects and anyone who insists otherwise is a capitalist roadster compradore class irridentist'. Splittists!

It will likely also "discomfit" parents and priests.
And many American college boys.


Sadly, it won't do squat as far as making trailer parkers, inbred rednecks, and bible thumpers angry. They're too ignorant and won't recognize the tune (and "it's probably in French"). 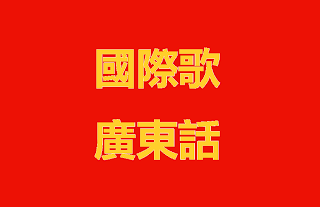 The Internationale is associated with communism, socialism, revolutionary and social justice movements, rebellion against oppressive authority, student and minority political movements, anarchists, atheists, freethinkers, and just generally irritating the powers that be.

The Cantonese language is spoken by troublemakers, stubborn people, and folks upset at the British and other imperialists like Mandarin-speaking carpet-baggers.
As well as the only people who know Chinese cuisine.


It is a very optimistic and rambunctious song.