When I first started working there years ago, there was a greasy spoon deli on the ground floor, with it's entrance around the corner on Pine Street. Every morning I'd walk into the office building lobby, and the smell of roast chicken greeted me. Several of my coworkers hated it, and it was a constant source of inane blathering whines. One of them had many food dislikes, and was the most vociferous.

It was an enjoyable fragrance. They must have done twenty or thirty chickens every day. With thyme, rosemary, oregano, garlic, and the perfume of lemons. Served in broth, or with rice pilaf, or classically with mashed potatoes and roast vegs.
They also had delicious meatballs.
Keftedes.

There was rejoicing when they were replaced by a Thai restaurant.

It was quite mediocre, but everybody absolutely loved it.

I missed the chicken. It was very good. 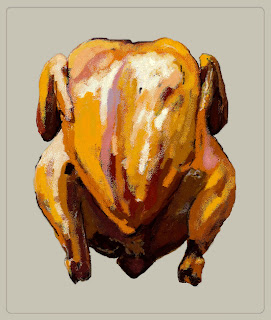 If you work in downtown San Francisco, some of your colleagues are undoubtedly idiots, others have food hang-ups, tics, and phobias, and the overlap of those categories covers over half of them.
It's probably the same group that won't get food from the taco truck because it might give you food poisoning. Which they firmly believe is an inevitability, those Meskins, you know, what do they know from hygiene, they brought bugs with them when they crossed the Rhine.

At one local lunchtime restaurant, without a single Latino on staff, the workers wiped the cutting boards with the typical grey sodden cleaning rag, and rarely washed their hands because they were wearing sanitary gloves ..... which they never changed.

And of course everybody loved the chain of upscale buritto joints, now notorious for microbial incidents. Shan't mention their name, but it's well-known for catering to a hip white crowd.


You know, salad bars are more likely to give you cramps and intestinal disasters than the food truck. All those cut vegetable surfaces ..... there are good reasons to prepare your raw vegetables at home, and avoid them at lunch places. The good news is that a real salsa is relatively safe; freshly prepared, with lime juice and salt which act as inhibitors, by someone who knows what he or she is doing and fears the effects of microbes on his or her own digestive system (can't afford to be out for two or three days with food poisoning).

There's a reason why the scrawny white dude at the salad place looks wan and poetic.
He eats spiritually uplifting food filled with good karma.


So anyway, the Greek proprietor of the chicken place was often in a dour no-nonsense mood. There was a lot of work to be done, and he had been there since before six in the morning. The food, though somewhat unimaginative, was excellent, and they also had a Chicana on staff who made tamales just like her mom's and some spicy side dishes, the ambiance was strictly cheap downtown diner meets industrial. Very old school.

And I had a big bottle of hot cock sauce upstairs in the office fridge.
So a full lunch togo for three floors up was a frequent thing.

The Thai place, as I said, was mediocre.
But it had bright colours. Pretty.
And they smiled a lot.
Popular.


Yeah, whatever. Miss the chicken.


I also miss the Chinese place around the corner. They had excellent chicken jook. I never go to that part of the city anymore, I have no reason to be there.