READING, FOR FUN AND PROFIT

Not surprisingly, the ancient history of China is filled with stupendous bloodshed and massacres, very much like Europe up to the present era. And reading about those times is both confusing and fascinating. The commentary of Zuo (左傳 'jo chuen') upon the first few readings does not provide much clarification, Wikipedia doesn't either, and operas and novels set in that period simply add confusing spaghetti-like strands to the soup.

There are things crawling in your soup by the time you put your laptop down.


'So this old guy went to see a king, who asked him "dude, you've come a long way and it took a lot out of you, don't you have something valuable to say?" And the old fellow answered, "big guy, why are you talking about valuable? If you ask about that, the chap who owns the villa next to the golf course will ask "hey how about me? These balls keep breaking my expensive plateglass windows and denting my beemer!?!", and the grocer will say "gotta any deals on canned goods today?", and then the dumbass with his pick-up truck on cinder blocks will ask if I've got any good used tires. From the greatest celebrity bastard to the stoned shanty town trash, everyone will be asking for favours and advantages, and because of their bourgeois attitudes the whole shebang will go to hell in a handbasket; better ask about proper behaviour. STF about valuable.'


That, slightly re-phrased, is how the Book Of Mencius starts.

Mencius went to see King Hui of Liang. King Hui of Liang said "You have travelled a long way to get here, surely you must have something to profit my state!” Whereupon Mencius threw a polite hissy fit, because that wasn't why he was there at all. After that was over he gave the king a lecture on proper governance, and then several weeks later moved on. 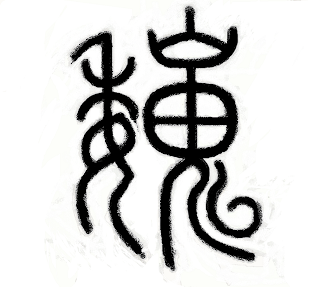 WEI [魏]. THE CHARACTER SHOWS A WOMAN WITH A SHEAF OF WHEAT
ON TOP OF HER, NEXT TO A DAEMON WITH A MOUNTAIN ON HIS HEAD
King Hui of Liang (梁惠王 'leung wai wong') was originally marquis of Wei (魏 'ngai'). He eventually said the heck with that, and made himself king, known to later writers as Hui of Liang after the site of his new capital fortress at Kaifeng (開封 'hoi fung'), called Liang (大梁 'daai leung'; "great Liang") in those days.

All of this makes for good reading. Imagine a bunch of Texas vulgarians squabbling over their 'freedums' and flashing unimaginable bling around. While a bunch of lawyers and spiritual blokes on the sidelines are wailing about laws, ethics, and values.

[Rereading stuff I first explored in my twenties and thirties. It's a refresher.]

It's been an exciting morning. Time spent well.
Contemplating lunch and a smoke now.