Years ago, in addition to matters vaguely political, I wrote about diverse exciting topics in this blog. Which attracted lumberjacks, Australians, a great number of devious perverts (mostly Republican, though a few were Christians), and many people who started drinking at ten in the morning. As a reader named Spiros aptly expressed it: "a blog which features repeated references to curries, Talmud, Malayo-Polynesian languages, Manga, medieval Dutch poetry, pipe tobacco, and transvestites, not to mention wombats (CUIDADO LOS UOMBATS!), could be fairly characterized as being catholic ".
End quote.

Also, cited by that same Spiros from the beginning paragraph of a book that ranks up there with the Bible as well as On the Origin of Species (by Charles Darwin) as paradigm-shiftingly influential on Western Civilization: "We were somewhere around Barstow on the edge of the desert when the drugs began to take hold ... suddenly there was a terrible roar all around us and the sky was full of what looked like wombats, all swooping and screeching and diving around the car ... "


Curries? Remarkably, I had curry very recently. It was a mild Chinese Codfish Curry at a chachanteng in Chinatown. Too many onion pieces but otherwise splendid. Especially with Sriracha hot sauce. An English version would probably have added raisins. All those other things still fascinate me too, and are still fixtures in my life.

Well, except for wombats, that is.

All of this was before I became single again, boring, and extremely unlikeable. Much like my current readership, one imagines.

A comment left by Anonymous underneath a blogpost a long time ago paints a picture of a more zesty era: "Big butch penguins in tight silk panties. I am surprised that sex-boutiques do not sell these, I think they would be more popular than almost anything else there. Surely they would be more desirable than the horse-sized penii, the strap-on devices, studded rings and harnesses, the blow-up love-ewes, and the spongy rubber pleasure piggies? Not that I would know anything about that, of course. I haven't ever been outside of a yeshiva environment. Where these things are entirely unknown."
[End cite.] 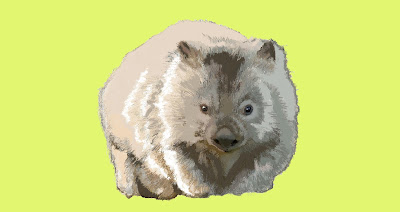 It was probably one of those yeshivot near Times Square and one of the seedier areas of New York, where the virtuous Talmedim go to and from school with blindfolds on lest they see something disconcerting. As the Sfas Emes (Rabbi Yehudah Leib Alter, b. 1847, d. 1905, second Gerrer Rebbe, grandson of the Chidushei HaRim) says, reading from Deuteronomy: "Shoftim ve shotrim titeinu-lecha, be chol sheariteicha, asher HaShem notein lach" [Judges and officers shall you appoint, in all the gateways (cities) which the Lord has given you], as a command to guard the gates to our awareness and monitor our senses, so that we do not see what we should not see, nor hear what we should not hear.

What do I know from wombats? Bupkes.

Lunch was at a familiar place. Jack was there. As I might have mentioned previously, he's much older now, and calmer too. There weren't many customers, and though we were at different tables, we conversed about the Chinatown of thirty years ago. The neighborhood has changed, a lot; different people, and more newcomers. Fewer places where old-style American Cantonese food for the locally born population is served. Ping Yuen Bakery, Uncle's, San Wah Kue, the Universal Cafe, Tao Tao; all gone now.

I didn't tell him that change is good. There is more chachanteng food. I speak far better Cantonese than I did then. And, with visible grey hairs, people treat me nicely. Back in that day I was younger and stupider, and quite probably rougher around the edges.

I do rather miss apple pie at a coffee shop counter with a steaming cup.
Then going around the corner to watch HK crime flicks.
There are no movie theatres anymore.