We often speak of Chinese as being 'ideographic' -- that is to say the written characters represent ideas or concepts -- but in fact that is not accurate by a long shot. In all versions of Chinese there are written characters that represent sounds more than ideas; that which is expressed is the sound, and only by the sound do we know what is meant. The two written characters of lute (琵琶 'pei paa') or bat (蝙蝠 'pin fuk') have no actual meaning other than their sounds, they are not used separately for anything else. The radicals do not necessarily add meaning, but merely serve to identify the complete characters as parts of the musical instrument category and buggy whatchamacallit categories respectively.

The two characters illustrated below are perfect examples.
They don't exist as useful words other than combined.
They are almost never needed anyway. 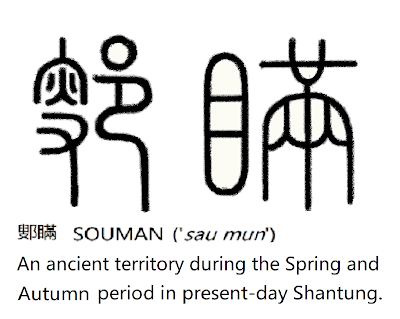 鄋瞞 was a barbarian territory during the bronze age which no longer exists, having long ago been subsumed. It is mentioned in the Spring And Autumn Commentary (春秋左傳) as well as the writings of the grand historian.

Almost nothing is known about Souman or its people.
Even the ancient writings hardly speak of it.