For several minutes I considered frustrating the big dog on the street outside who first avidly sniffed at all traces of other canines then assertively marked his territory. Three times. But that's MY hydrant, MY lamp post, MY parking meter! Gonna pee all over his signature!
Then I realized that I can no longer do that.

Too many cops in this neighborhood.

Still. Those things are all far more mine than his.
And I really wish he would stop acting like a damned conquistador.


All things considered it's probably a jolly good thing that humans no longer mark ownership or proprietary interest in things by pissing all over them. And please disregard the drunks in alleyways and doorways late at night, or the entire area south of Market Street.
As well as frat boys and many politicians.
Those are anomalies. 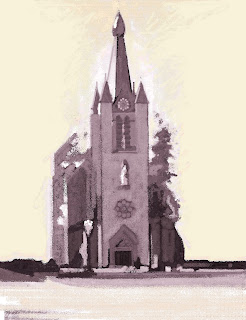 There were several dark corners in the peripheral brickwork of the church across the street from our old house in Valkenswaard. And over a dozen bars within easy walking distance. Many of the men who peed against the edifice on Saturday nights were part of the congregation Sunday morning. None of them were ever struck by lightening.

Email ThisBlogThis!Share to TwitterShare to FacebookShare to Pinterest
Labels: Valkenswaard