It is a commonly acknowledged fact that Dutch tourists are desperate for edible food. Back in the stone age, before they discovered air travel and Thailand, they took a six weeks supply of comestibles with them when braving the Spanish wilderness on an arduous yearly voyage to a camping location deep in the Costa Del Sol. Canned peas, teabags, soup, sausages, and even bread. Because surely edible food could not be found elsewhere. Every Netherlander knew that Italian and French food gave you the runs, good lord how did they survive?

For a few years, Dutch visitors to Thailand and elsewhere lamented that there were no frinkandellen there, and scoured the internet including this blog for recipes. They were desperate. Now there are recipes on youtube, and they can make it there.
I no longer get readers looking for frikandellen.

It is not likely that they'll next search for bloedworst ("boudin noir").
Nor are they desperate for boterkoek like mom used to make.
Or raw herring. Which is also detailed here.

Last week a Dutchman asked me where in San Francisco one could get Frikandel. 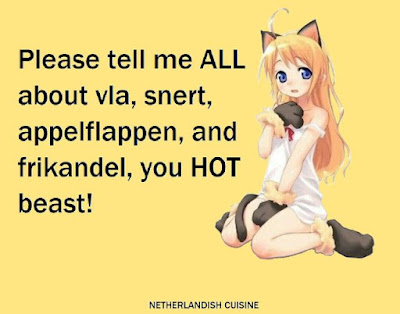 Sadly, it is not available here.

We're just as bad as those Spaniards, Italians, and French.

There is nothing to eat in this city.


Sometime later today I'm heading across the hill for lunch in Chinatown, where not a single restaurant serves frikandel. No wonder there are so many lean people there. Because, given a choice between fish flavour eggplant, ma po tofu, concubine chicken, dragon tongue fish with blackbean sauce, various dim sum items, won ton soup, garlic porkchops and stirfried mustard over noodles, charsiu pork, roast duck, steamed fish with ginger slices, or tender greens with shrimp, on the one side, and frikandel speciaal met friet on the other, there is logically speaking only ONE possible solution.