There are times when going through a dictionary of Chinese characters yields some rather delightful mental images, especially when you are aware of archaic forms of the characters. Those being the forms incised on tortoise shells and scapulae for divination purposes, which gave birth to the words engraved into the casting forms for bronze ritual vessels and enscribed in records, carved on stone, grooved boldly into stellae.
Under 鼎 ('ding'; tripodal bronze cauldron, cooking vessel), one will find 䵼 ('seung'; to cook, to boil, to stew). Which, because it's both complicated and no longer used, will not be in many dictionaries, and therefore allows the reader scope for fun re-interpretations.
Especially when taking the phonetic element into account.
將
Which sounds like sauce, jam, commanding officer.
A general of the army. 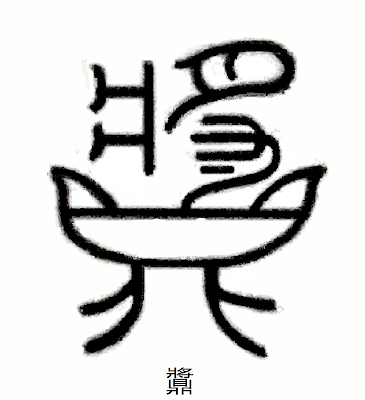 ELEGANTLY COOKING A GENERAL IN A BRONZE STEW POT.
AND REDUCING HIM TO SAUCE.

Twenty four strokes.
䵼
Shows up in old commentaries as well as descriptions of ritual stuff. Basically a fancy word for "boiled". I think I prefer my version.

Ten generations ago one of my ancestors was a general in the revolutionary war. I do not know what happened to him afterwards, or how his remains were dealt with.
Perhaps I should research that.