AREN'T YOU GLAD YOU ASKED?

A friend asked wether a recently Facebook-posted illustration was self-representational and done with tobacco ashes. Naturally I could not resist responding with an entirely straightface, seriously, and seemingly oblivious to her jest.

Dry brush calligraphy, seal-script version of 華 。A variant shows a closer derivation from the ancient form: 䔢。Pronounced 'waa' (Cantonese). Representing, anciently, pistil and stamen plus petals (a flower), hence, by extension and further linguistic development: flowery, elegant, ornate, and then by a further usage development over the centuries an appellation for China. Distantly ablautive of 夏 (Xia, 'haa'), which in the narrow sense means 'summer', and because it was the name of one of the dynasties (circa four thousand years ago) is also used for China and the Chinese. A variant of 夏 is 夓。Which in addition to the hand underneath holding the vessel upward, has hands on the side indicating a plurality of celebrants at a ritual, and hence a cooperative or community event. 華 is filed under the grass radical (艸 'chou') in the dictionary. Because it got 'borrowed' for other meanings, 花 ('faa') became the more common term for flower. In Mandarin they still sound nearly the same. And note that a variant of 花 wich has the same strokes in the same order (芲) is somewhat confusing to the modern mainlander, because what looks like the phonetic element (仑) is pronounced 'luen', rather than 'faa' (化 "transform"). 仑 is, it seems, only used as a phonetic, an easy script version of 侖 ('luen'; "logical order", "arrangement").
Which is the right-hand part of this: 棆 ('luen'; "camphor" [archaic]).

The two characters in question: 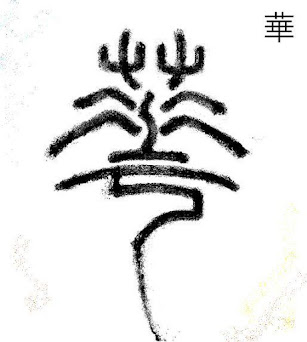 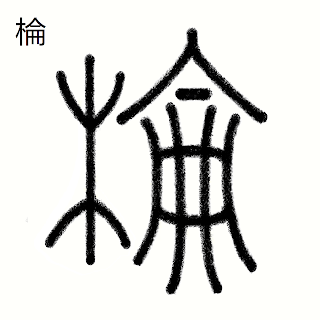 It is likely that I'll end up doing a seal-script version of 夓 soon; it seems interesting and appropriate or germaine, and I kind of feel obligated.
It's a bit Aspy. So yeah, um. 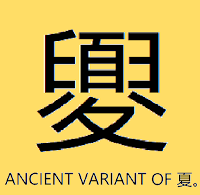