The diplomatic man knows precisely when to not bust out laughing like a maniac. Such as when one sees a tattoo in Chinese on a person who does not speak, read, or write Chinese, that says something peculiar. Which is not uncommon. "Death before dishonour" mangled by self translation into something that suggests 'kill first, abuse body later', or, for instance, "I like soup". Where it helps knowing that "soup" (湯) also means 'boiling water', 'hot water'. As in Japanese 銭湯 (錢湯) "sento": public bath house. Possibly she meant that she's clean.

It's best, when having a tattoo made in a foreign language, if the needle artist has mediocre skill and a sense of humour. Plus the ethics of the author of the Hungarian Phrase Book featured in a Monty Python skit.

I also recommend Hebrew and Dyak tribal symbols for tattoos.
Because every one needs to know you're a surfing rock.
It's meaningful and expresses your auras.

[For the record, I do not have tattoos at all.]


For a long time I have enjoyed Chinese calligraphy, even though there is much that I cannot quite read. My vocabulary is not fully literate level, and I frequently need dictionaries. Much of Chinese calligraphy relies on abbrevation, stroke-flow, and the viewers' comprehension of context. The modern mainland script has enshrined abbreviated forms as the standard for writing, in the "simplified script", turning, for instance, many left-hand elements into shorthand scribbles, and reducing the majority of complex characters to more simple-minded graphics, sometimes with no discernible relation to their original forms. 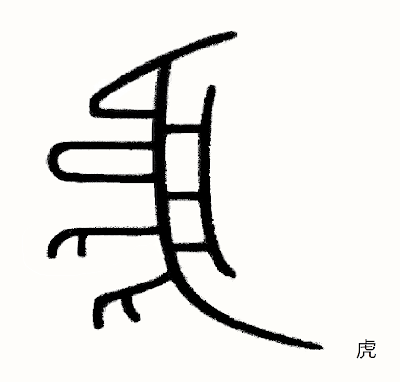 The example above is a variant on Zhou dynasty bronze engraving script, such as might be found on a tripod or ceremonial vessel commemorating a clan achievement or honour.
A tiger as the beast with claws and stripes. 虎

No, not a tyranosaurus rex in a bikini top, which would also be quite frightening, but the ancient Chinese did not conceive of that! I feel confident in stating this as a fact.

Flowery, elegant (華) has turned into 华, which changes it from fourteen strokes down to six. The great advantage for many people is that such simplified forms are less likely to become inkblobs. Possibly they are also easier to memorize, but I wouldn't know because I largely don't use them and haven't learned more than a few. 華/华 in it's old form is rather striking. 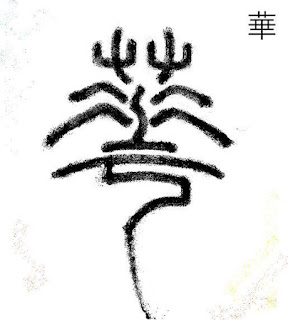 My copies of the collection Three Hundred Poems of the Tang dynasty and the classics, are in the conventional script characters. And many of the local Chinese publications, or books I've purchased, use strictly that style. But visually, seal script is magic. A word chosen at random, because I liked how it looked, 棆 rendered in that fashion is almost poetry.
A tree next to a bundle of reeds held in union: camphor. 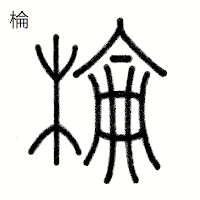 This writing style is seldom used nowadays except in art, and, fittingly, this word is no longer the common term for 'camphor' anyway. The standard usage is 樟 ('jeung'). Stick ink used for calligraphy (墨) frequently has a faint whiff of its frangrance. Or sandalwood, or evergreen. Learning seal script and practicing writing it is both enjoyable, and a fascinating exercise. Sinuous blobs, taut curves, rigid bars and pillars, escaping snakes. Plus signifiers (the graphic element that indicates meaning category) in juxtaposition with phonetics.

[Note: brushes, if not in regular use, should be bundled together within a reed mat made for the purpose (筆卷).]

Of course, seal script still is used for seals. Official name signatures, departmental sign-offs, marks of ownership or authorship, items in a collection or library, literary fancies, nicknames, noms de guerre ou de convenance, etcetera. And often callipgraphers and scholars will carve them for their friends or themselves.