A bag of little cookie fruit tarts (raspberry) from 'Belgian Boys'. Fruit is part of a balanced diet. Because after discusssing various Cantonese dishes with the owner of a bar in Chinatown, a man has an emptiness which must be filled. She likes fish fragrance eggplant as well as ma po tofu and steamed salt fish pork patty (in descending order of fondness), and we both think it somewhat amusing or charming that Cantonese people can turn a vegetarian dish -- such as the first two of those three -- and consider it more perfect with the addition of meat.


Look, if you wanted only vegetables, just eat around the pork.
Consider it a garnish, much like parsley.
Nice fatty parsley.

Somewhere in Hong Kong someone is wondering "perhaps I should add a hefty handful of shredded cheese on top and stick it under the broiler? Plus mebbe some salt fish ...... "

And if you were Hunanese, you might add some slivered fine ham on top as garnish. It is unknown what a person of mixed Hunanese and Hong Kong ancestry might do, none of them lived to adulthood. They all died of exploding arteries, heart disease, and cholesterol rupturing from their chest like the monster in 'Alien' before they were adolescents.
Trust me. This is very well-known.
They had a good life.


There were two teevee screens on in the place, but no sports at all. One screen showed anime, the other had karaoke. No one was singing, because other than the bookseller and myself there were no other Caucasians there. Nor any Chinese.
So for once actual conversation was possible.
Haven't had that there in years.


Earlier, while discussing the miserable cold we are currently experiencing with my friend, three gentlemen passed us wearing only tee-shirts on their upper torsos. Probably exiles from the Yukon for whom this temperature is 'balmy'. Either that or drunks with dulled senses. Look, pilgrims, I've got TWO tee-shirts on underneath my heavy lumberjack plaid shirt, a thick sweater over that, and a coat. It's cold. Y'all are freaks.

Also appealing as a late night snack snack would be some Spicy Chicken In Claypot (蔥爆辣雞煲 'chong baau laat kai pou'). Pity that the casserole restaurant on Grant (金堂閣 'kam tong gok') is closed at this hour. And longjohns. Sitting in a late night eatery with hot food while wearing warm fuzzy longjohns, very Minnesota, would be so nice! 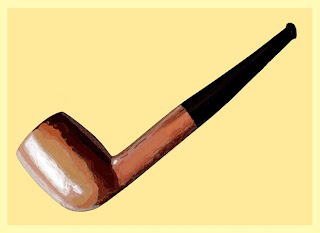 Other than the arctic temperatures, it was a typical Tuesday evening, such as we've done for years. And this time I made sure to bring the appropriate smoking impliment: The Pipe For Watching Rats In Spofford Alley. There were no rats. They probably all stayed indoors because of the cold. Smart creatures.