One cold bitter wind! I often complain about the weather in this city, because it isn't entirely conducive to smoking my pipe outdoors, and I would rather smoke indoors -- being a social man means avoiding people, especially the person one lives with, at certain times -- which under current circumstances is impossible from around two-thirty onwards. That means that errands and tasks will be planned around a very late lunch time, so that I can be out of the house for a while during the period when smoking will be impossible.
It also means that I must dress appropriately.
And pay attention to the weather.

[From 2:30 onwards: my apartment mate doesn't come home until after five, but the smell must air out for a few hours.]

Which today I did imperfectly today, and consequently froze my rear end off with a pipe in my mouth. Didn't need to worry about other pedestrians; the wind was that biting. Other than a young lady who decided to go jogging on the most foottraffic congested thoroughfare in SF (Stockton Street), most people were in a hurry to get home to their tropically heated apartments, away from the Sarah Palin frigidity of the outside world. 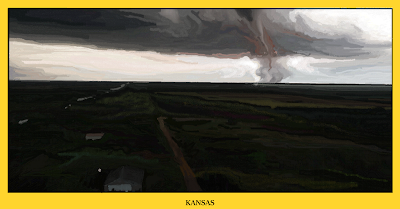 How does one dress for a tornado?

Another problem is that under such extreme conditions, lighting is slightly problematic. And there might be other issues, like staying upright. Or keeping one's composure while local conditions try one's patience. Slight chance of rain.

Socks. What socks does one wear?