WHY WE DON'T GET MANY FINNISH TOURISTS

According to research, there's a belt of alcoholic countries from Moscow to Ireland where the population consists mainly of problem drinkers. Remarkably, neither Holland nor France are in it. From right to left: Russia, Finland, Poland, Germany, Belgium, Great Britain, Ireland. Russia takes the cake. They're plastered every day of the year.

[NOTE: Holland really SHOULD be included; I have always considered Dutchmen on a liquour bender to be problematic and bad for morale. Right-blisters anyway. And there ought to be a law about that.]


There is some correlation with how irritating their tourists are when visiting San Francisco.

Too few Finnish tourists to be any more exact. The weather here does not appeal to them, and presumably they've not seen Baywatch often enough to assume that we have a balmy mediterranean climate suited for sun-tanning (and slow-mo running towards the surf).

Sweden is worse than Holland, but most of them are educated enough that they know that there is no surströmming here. Or sunlight. They too have a cold climate, and generally speaking aren't particularly mis-informed.


"In Oslo it is dark for eight months of the year, and it's cold enough to freeze your wrists off, and there's only golly fish to eat. Administrative errors are bound to occur in enormous quantities. Look at this! It's all a mistake! It's a real pain in the sphincter!"


Still. Hardly any Finns. By their standards San Francisco is a ruddy sauna. And almost no Swedes either. They worship the sun too much. 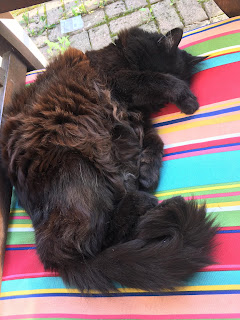 Picture of a Swede.

Note that the Swede in the picture above just finished a delicious meal of surströmming and akvavit, and is getting ready to impart a hairball into your fuzzy slippers. She lives in Ohio, which is darn-near tropical as regards heat and humidity at 75° (Fahrenheit), where many people are presently outside in their tie-dyed tee-shirts, short shorts, and flip-flops, working on their gardens and probably planting parsnips!

[Per Duolingo, Parsnips are a favourite food of the Welsh. This is useful information. Avoid Wales.]

If we were to do that here, frostbite and hypothermia would send us to the emergency room to have our nipples and toes amputated. Instead, when we go outside it will be wearing warm steel-tipped army boots to protect us from stumbling over frozen lumps of human fecal matter on the pavement and homeless people developing gangrene in their affected limbs.


It's forty seven degrees in my part of SF today. Yet bright, which is deceptive. There will be a (strongly worded) letter to the editor!


Meanwhile, those self-indulgent Swedes and Finns are at the half-built resort in Mallorca or Cyprus, enjoying the Roman ruins and sun-tanning opportunities, admiring lizards in the bidets of their vacation suites, and eating oily foods while getting progressively more Baywatchish in their sun-blessed brownness. It could make a man hate the world.

It's SO unfair that there are Finns and Swedes in it!