SOUTH OF THE FIVE RIDGES

The right leg of the head thing was tweaked a little, which is orthodox -- it's attested in the sources -- and the south character is not, as you might have expected and may have been taught, a sheep under a roof, but a set of chimes hung on a rack as might be used during ceremonies in the great hall. But other than that, it's not a particularly surprising set of seal script characters representing more or less the entire area from the five mountain ridges all the way down to below the red river.

The great southland, where people went to escape incessant war and the brutal exactations of feudal lords. As well as later getting away from the salt tax, snooty northerners, and rigid orthodoxy.

All in all, malaria was a small price to pay. 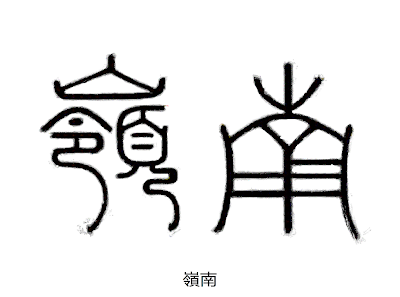 Remarkably, they wrote great operas about the generation after generation defense of the northern frontier, hardly anything at all about their own adventurous exploration and conquest of the jungles and swamps, or the bugs and poisonous things.

Possibly because literacy meant having the proper sensibilities and adhering to the accepted forms and norms. And the north, the Central Plain (中原 'jong yuen), was the homeland, as well as the heartland of civilization, whereas the southern edge of empire had no clear cultural definition.