At the place where my apartment mate volunteers regularely there is someone who is so far out on the spectrum that the sun doesn't shine there, it's a bleak windswept waste land. But that individual is a self-confessed "good person" and a firm Christian. That last is important; it gives her a code of conduct and a righteousness that are well nigh impossible to deal with.


Besides, many Christians give me the heebie-jeebies. I think in the case of my apartment mate, though she is further on the spectrum, she is better with Christians than I am.
She hasn't been told that she is going to hell nearly as often.

Hell, as everyone must realize, is filled with Christians.
It's one of their favourite places.

Hell is probably somewhere in the Deep South, but has a lot in common with deepest whitest Sausalito. And there are tourists there, both foreign and domestic. Who cannot spell the word "mask", and never wear those things anyhow. Because travelling is magic (they don't realize yet that they are never getting out) and makes you impervious, almost immortal.

[There were 21 of the mask-free blighters on the bus to and from Marin yesterday.]

Obsessively, I count maskless people, dog walkers, offspring walkers, dog walkers and offspring walkers without masks, people carrying yoga mats, people dragging sheets or blankets, people acting erratic. Except for the mats and bedclothes, these people also infest where I work. There's always a mechanical sound in my mental background that goes "ding" and a new number in whichever category flashes. I might be talking to you when off in a corner of my mind, having registered a human turning a corner, there's a "ding", two hundred and forty nine TODAY! In neon. For someone not on the same spectrum, that might be hell. For me, because I recognize certain numbers as being inherently beautiful because of their colours and aesthetic appeal -- 249 is an elegant number, much prettier than 250, which is sterile, and also better that 248, which lacks interest and is too perfect -- this presents a tweaky interest and punctuation.

I suspect that if I had a surfeit of good people and Christians to deal with, eventually they would sort themselves into several categories, I would start counting them, and they would also have buzzers or bells.

Things must be counted, tasks must be performed in the same order, items must be placed exactly here or there, and certain things should be done regularly for no logical reason at all. Otherwise everything is just wrong. As just one example, on the first day of the month, you say "rabbit rabbit" early in the morning. Preferably before anything else.
It's the correct thing to do. Und daß muß so sein. 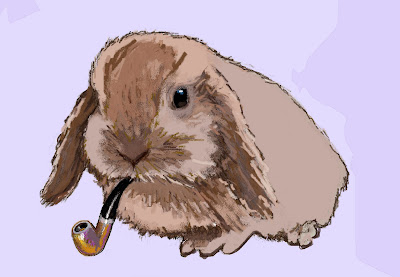 Look, I don't know why that is customary, it just is, okay? If it is not done, you might as well forget about everything else, you started the month on a bad foot, perhaps irritating "good people" or "Christians" will pop out of the woodwark, and your mental bells won't ding in the same perky charming manner as without quite realizing it you count the men with brightly coloured jogging shoes.