Some words in the dictionary are nearly useless. For example, an obscure word for an animal that is commonly known by other names, such as 'mintikin' for ant. And although charming and empowering to use in conversation and in a paragraph, once or twice, it is irritating when used any further, being merely a "literary" affectation and oddment.

Mintikin shows up in The Brothers Karamazov.

The only time I've used it is here.


Archaicisms, dialect, and obscure literary fragments. Also numerous items in Chinese dictionaries. Under the 臣 radical we find the unusual character 臩 (Mand. Guang, Cant. 'gwong'), defined as: startled, embarrassed, shy; scared to the point of running away. Reference: 臦 and 囧 and note that the latter is, appropriately, an emoticon for embarrasment or helplessness. Used as the personal nomen of a court official tasked with admonishing a territory under King Mu. 穆王閔文武之道缺。乃命伯臩申誡大僕之政。
From the 周本纪 (Book of Zhou): [When King Mu came to the throne, the Spring and Autumn Period had already passed fifty.] The king's way was declining, and King Mu, Min, lacked the way of civil and military affairs. He ordered 伯臩 to admonish the government of Taishou.

And that's pretty much the only place you will find 臩 because it was not a commonly used word for over two millenia. 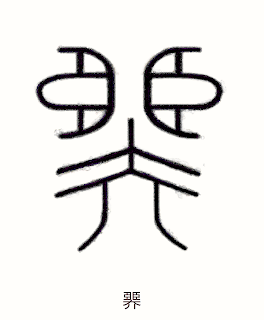 Calligraphically it has symmetry and great elegance.
But other than artistically, it is useless.
In seal script it rocks.

NOTE: I found this character while stumbling through the dictionary, and had to research it.
I like the way it looks in seal script. But I cannot think of any use for what I found.
Curiosity value, maybe transcribing old stuff, that's it.

I often stumble through the dictionary.
It's fun.