KEEP AHEAD OF NAKED MEN WITH BEER

The problem with where a person works is that it is seldom anywhere near where he or she would like to eat. Which, in my case, means that it is near what can best be described as an inconvenience store. I would have gladly spent more on something appetizing. Which would have necessitated a motor vehicle. Years ago someone recommended a restaurant in San Raphael ..... perhaps presuming that I could take a one or two hour lunch before leisurely waltzing back into the salt mine to take my position at the oars again.

So you can understand why on my days off I tend to head into Chinatown for civilized food. And no, delivery is a ridiculous idea too. Long ago I gave up on the idea of eating well at work. That's not what work is about.

The suburbs are an unending array of mediocre life-choices and circumscribed options.

There are junk food establishments a little bit further away than the nearest haven for the starvingly inconvenienced. Where there is a limited selection of sandwiches and cans.

What I wanted yesterday and today was dumplings. 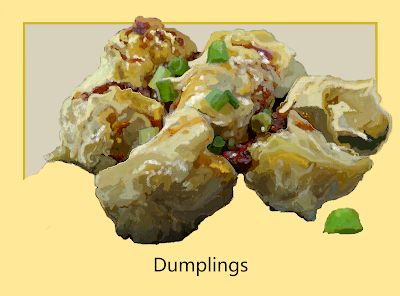 Home made dumplings. Minced pork and chives with a little ginger and some water chestnut for crunch, dough skin simply bunch-squeezed around it no fuss about nice neat folds or pleats, boiled till floating, drizzled with a little soy sauce, hot oil, dash red vinegar, and Louisiana hot sauce, or sambal. Garnished with chopped scallion.

I have on several occasions brought food from home. The unhealthy curiosity of suburbanites coupled with obvious distaste for my strange foreign muck encourages me to not do so.
Some of those people are frightfully "white".

One very good thing, however, is that I will be nowhere near Bay To Breakers race tomorrow. I will not be exposed to hundreds of naked flabby marketing department monkeys, sales dudes, and frat boys, pushing beer kegs up Hayes Street and toking on the group bong. Or gay sprites in zany outfits of any kind. This "precious" yearly mass event, a cherished San Francisco tradition dating back to allegedly to just after the earthquake, attracts around a hundred thousand participants and an equivalent number of giddy spectators whose lives, today, are otherwise empty and devoid of meaning. Or more. It makes traffic in the city a nightmare, ties down a huge percentage of the police force so that crime can run rampant away from the route, and leaves a trail of garbage and human waste stretching from the Embarcadero all the way to the Pacific Ocean.

African runners have participated since 1984, and won every year since 1991.
Possibly because they are sober people. As well as adults.

Nobody I willingly associate with has ever run.
To the best of my knowledge.