An article written by Shmuley Boteach back in 2014 asserts that "women are not looking just for love in a marriage; they are primarily looking for lust. A woman wants to be wanted, needs to be needed, desires to be desired."

Well shoot. When you want to know what women really want, consult a rabbi.

Rabbis will always know the innermost wishes of a woman.

A) Pockets.
B) To speak for themselves, dagnabit.
C) Cookies. And chocolate. And cookies with chocolate.
D) Equal pay for equal work, longer maternity leave, and someone to wash the dishes. Better and cleaner public restrooms all over the place.
E) All of the above.

Option D is edited from someone else's comment, but if you guessed E you're on the right track. I would ask the women I know, but I fear they might not shut up on the matter.

One woman I know (my apartment mate) would also insist on fresh seafood, most especially shrimp and lobster, plus oysters, crabs, mussels, and fresh geoduck or salmon sashimi, but she's Cantonese American and might only speak for her own kind.
Pockets, to speak for themselves, cookies, chocolate, equal pay, abundant powder rooms, plus shrimp, lobster, a veritable crustacean buffet, and sashimi.

Aother woman I know also wants cucumber flavoured potato chips, as well as the ones that have salted egg (黃瓜味薯片、鹹蛋黃味薯片 respectively), but she too is part of a subset, it's not universal. A third woman I know wants the Giants to win, but I suspect she has issues.


In any case, I feel certain in asserting that the women I know do not want all those things that Boteach claims they do, and definitely not from me. It would upset them. So he's full of crap.


"Women are not looking just for love; they are primarily looking for lust. A woman wants to be wanted, needs to be needed, desires to be desired."


What men want, at least sensible men, is a Virginia Perique tobacco that reminds them of the old Escudo, as well as a warm quiet place to enjoy that after a nice cup of tea and a snack. Cope's Escudo was made in England, and disappeared years ago. The current product by that name is made in Denmark, but not quite the same. 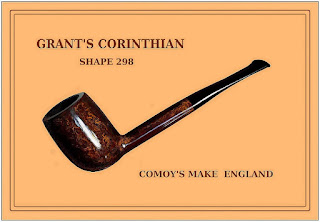 Heading into C'town soon for milk tea and a pastry. Will be having a pipeful afterwards.
You've probably figured out that I have pockets. They're very useful.
Briar. Pouch. Matches. Tamper. Cleaners.
No chocolate.


Some men also want a woman who has a cat. But that's just a guess.