The parade ground at Wong Chuk Hang (黃竹坑) was where graduates of the Hong Kong Police Training School (黃竹坑警察訓練學校 'wong juk haang king chat fan lin hok haau') had their passing out parade, at the southern end of the island. It is across Sham Wan (深灣 "deep bay") from Ap Lei Chau (鴨脷洲 "duck tongue island"). Nam Long Shan (南朗山 "south brightness mountain"; Brick Hill) is directly south of there.
Spectators, often, had umbrellas to shield themselves from the sun.
Hot and blazing in that climate at that time of year. 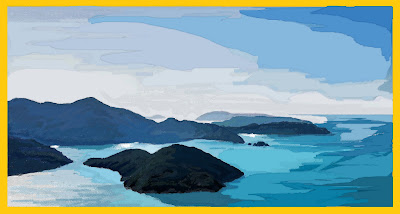 An old friend who has a bookstore on Kowloon lives and has her home office on Ap Lei Chau. One of the last smokers of Erinmore Flake in Marin County remembered that area, as well as Stanley Fort nearby, where he was imprisoned during World War Two. He passed away a few years ago. On the other hand, one of the other occasional smokers of Erinmore resurfaced about a week ago -- he had quit for a few years. He's walking with difficulty, and dodders, though seems well-preserved besides that. Erinmore Flake keeps you hale. QED

To the best of my knowledge Adrian never smoked Erinmore Flake habitually. And his stamping grounds were the Central District and the peak. 中環，維多利亞山(太平山)。


Because of those bagpipes I am now imagining the Cantonese language pronounced with a heavy highlands accent in the early years of the Crown Colony. By drill sergeants.
And I cannot imagine it; it would be entirely beyond unintelligible.

Worse than Cantonese spoken by Shanghainese.
Or Dutch by Americans.

You ought to be familiar with my trains of thought by now.
They often get hijacked by what's in my head.