NOT JUST THE FROGS

As you probably realize, pipesmokers desperately need pockets. Favourable attention too, but primarily pockets. So that we don't have to ponce around with a handbag to carry our two or three pipes, a tin of tobacco, tampers, cleaners, matches, battered copy of James Joyce's Ulysses, and identification in case we get cited for battery at a riotous demonstration.

Some tobacco brands came in tins too large for standard pockets. Solani is one still available, McClelland was one that ceased production nearly four years ago, and there was a time when the Dunhill mixtures also came in hundred gramme tins. 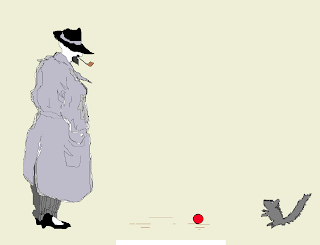 The regular McClelland tins were only a little too large, but the hundred grammes at twice that size might excite curiosity. And require what is affectionately known as a 'Flasher Mac', that being a skeevy-looking overcoat suitable for perverts. Which I used to wear.
Nowadays I have backpack with a Japanese anime heroine.
It's far, far less disturbing.


At one time, most pipesmokers probably looked like scrawny cousins of Ignatius O'Reilly, with considerably larger 'pockets' of stale air. Probably because instead of too many wine cakes they indulged in fine tobacco.

[At one time I seriously considered majoring in Mediaeval Studies, like Ignatz mentioned above. But I came to my senses.
I would not have contributed anything significant or meaningful, unlike my cousin who is a genius in that field.]

When that respected Missouri company closed its doors after forty years of making remarkable tobaccos, I counted the tins of it I had left. There was enough to smoke it regularly for almost four years, but since then I have not opened a single tin. Some of it has been aging for over two decades. It should be good now.

Three great English / Balkan mixtures they made were Three Oaks Syrian, Wilderness, and Legends. The first was formulated by Tad Gage and is a brilliant masterpiece.
The latter two are Fred Hanna's recipes and are stellar.

And they were very nice old fashioned tobaccos. Lighting up a bowlful was a contemplative act. Perfect for a long rainy afternoon in Autumn or Winter, with a book, hot tea, and a decanter of sherry that your nearest and dearest knew nothing about because they understood that you were "that way" again, fully occupied, and not to be bothered with a to-do list.

[Or liberate the bottle of cooking plonk from the kitchen. If chosen well, it will do nicely.]

For the sherry, you could substitute 绍酒酒 ('siu heng jau'; Shaoxing rice wine). Just inform the Cantonese American woman in the other room that you are conducting experiments, and that drunken chicken is not on the menu tonight. She doesn't drink, so she won't focus on the fact that you're spending four hours in the garage. With her bottle.

By the way: I seldom imbibe, and there is no garage.
We've never cooked drunken chicken either.

My friend Martin is particularly fond of Oriental Mixture No. 14., which is medium full Latakia with tangy Turkish on a base of red and black Virginias. It's Oriental forward, tangy and creamy, wine-like. A very rewarding and extremely old-style product. The Turkish note is top-notch. Terms like 'woodsy', 'cedar', 'myrtle', and 'oak' can be flung about; there is a tannic hint there, as well as the faintest whisper of the famous / notorious McClelland "ketchup".
But for many this would be a go-to all day smoke.

What McClelland remains most known for, however, are pressed matured Virginias, and Mary McNiel's lovely label art. The row of tins on any tobacconist's shelves stated that you had just entered an establishment that took pipe tobacco seriously and aspired to something higher than grotty skidrow headshop. This was something worth appreciating.

Many people were extremely fond of their 5100 Red Cake (Virginia tobacco, high natural sugar content, primarily a blending tobacco), which was sold straight or mixed with some black by a number of tobacconists. It was excellent. The kidney specialist who took up counter space with his one half pint and the Wall Street Journal of an evening became desolate, desperate, utterly heartbroken, and bereft, when it disappeared. Whatever was he to do, what was this world coming to, had the communists finally taken over? Woe! Woe!

[And that gentleman on the interwebs gloating, at the time, that he was safe, he did not smoke McClellands, he smoked McCranie's, hah, losers, was delicious in his despair when he found out that, erm, eh, it was actually McClelland tobacco, and there would be no more. Sorry, dude.]

In the bookcase behind me there are tins of No. 24 Virginia, Christmas Cheer, and Dominican Glory Maduro. Perhaps one of them would be a good tobacco to smoke in January, when the nonsense of the holiday season is behind us, and several weeks of bleak weather lie ahead. This requires careful consideration. Perhaps I need to light up a pipe to help me think. 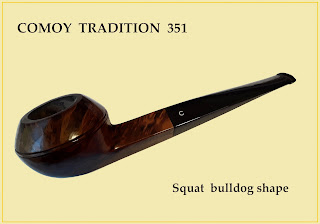 Later today: Bank, lunch, vegetables, ointment.
Another smoke after eating at Yat Pan Mei.
Then freezing my tuchus with a pipe.