You know your nose is buggered up when you get mucus on your spectacles. Then you start plotting the chain of transmission from the period when you were pre-symptomatic to when you will be snot-free. Which I'm guessing is probably the next day I work, that being a few days hence. I'm right-handed, so my right nostril fittingly is a flowing sewer at the moment.
Not that there is any possible causal or logical linkage.
I hate my right nostril right now.

If two thirds of one's sense of taste is smell, and fully one half of one's smelling organ is entirely out of commission, and the other half is working at likely less than sixty percent capacity, then logically what is called for is a stronger tobacco than normal, but given that the nasal terrain is also somewhat stressed, that won't work, and a weaker tobacco might be better coupled with fewer pipes today than normal.

Perhaps something earthy and sweet. 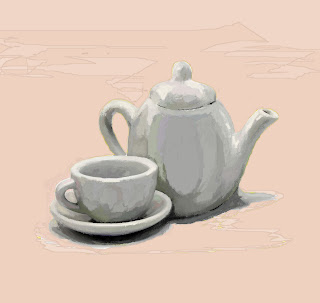 Everything I touch today will be smeared (and will need to be sterilized). Rather like the pipe stems of a deceased gentleman which I cleaned up over the weekend; he passed quite a while back, but every single one of his Castello briars (which are lovely pieces) showed evidence that he was wet-mouthed. Abundant evidence. All of them also needed a bit of mortise cleaning, as aggragation and minor swelling prevented full insertion of the mouthpiece into the shank.
Which had naught to do with his slobbering. That may have simply been old age, far too much salt in the diet, and the sheer lip-smacking goodness of Latakia blends.

No, I did not catch the runny nose from his smoking equipment.

Cold viruses can survive for slightly over a week on surfaces. He passed away quite a while back. His pipes may have been in unused for longer than that, and should find a new tobacco maven who can appreciate them. If it's John O. who fled Georgia for some place more civilized recently, he will have to use alcohol inside the bowls and shanks to remove all traces of the Latakia stank, as he has a quite unreasonable dislike of that substance.


The late aficionado possessed several 'Collection' and 'Fiammata' Castellos. Very handsome pieces, but too large for my taste, and I have never been particularly ennamoured of Castellos, though I will gladly acknowledge that they are stellar smokes and exceptionally well made.
They just don't appeal to me.

When someone else is smoking a Latakia blend I love the aroma. For very many years such mixtures were my regular indulgence. But quite a while back ago I switched over to Virginias and Virginia - Perique compounds, which I thoroughly enjoy. These appeal, at least I think they do, to calmer and more mature individuals. The fragrance is more old-school, almost antique.

My coworker has fallen into the Virginia trap recently.
He's currently ennamoured of Three Nuns.
It smells very charming.


If you're going to smoke Latakia, try Arango's Balkan Supreme.
For Virginia - Perique, Luxury Bullseye by Stokkebye.
Both are available as "house blends".
They're fine products.