Pursuant the illustration of the cheese pizza in a previous post, I realized that what I also needed to draw was the Chicago style hot dog. Which is an all beef sausage on a poppy seed bun with sweet relish, pickled peppers, a slice of dill, tomatoes, yellow mustard, and celery salt. And, if you are me, decent mustard substituted for the yellow, and a sploodge of Sriracha.
By the standards of Chicago I am a heretic.

Drawing of a Chicago dog. 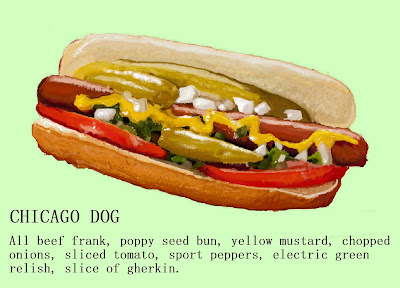 You will just have to imagine the celery salt. Drawing celery salt is entirely beyond my skill set. If the rest of the garden is there, you can assume that celery salt is present too.

From Wikipedia: Celery salt is an ingredient of the Bloody Mary cocktail and the Caesar cocktail. It is also reported to be an ingredient in KFC's secret spice mix. It is also commonly used to season the Chicago-style hot dog, the New York System wiener, salads, coleslaw and stews. It is a primary ingredient in Old Bay brand seasoning.
End cite

More Wikipedia: Old Bay Seasoning is a blend of herbs and spices that is marketed in the United States by McCormick & Company, and originally created in Baltimore, Maryland.

The seasoning is a mix of celery salt, black pepper, crushed red pepper flakes, paprika, and many others. Some of the other spices that may be used are laurel leaves, mustard, salt, cardamom, cloves, and ginger as listed in the original product in the Baltimore Museum of Industry. It is regionally popular, specifically in Maryland, as well as in the Mid-Atlantic States, the Southern States, and parts of New England and the Gulf Coast.
End cite


Clearly, celery salt and blue dye are hallowed elements in American cuisine, the masala on which the Yankees and Midwest Germans rely. Probably also used in Chicago Pizza and milk shakes, though not having been to the Windy City, I have yet to confirm that.

Here in California we might throw some salsa on the dog instead. A nice pico de gallo, not that pretentious mango salsa prefered at high style eateries. Some slices of chile en escabeche alongside, and you have a working man's feast.

This is where you and I probably fondly remember the bacon-wrapped grilled dogs sold by Mexican entepreneurs on Mission Street late at night, or on Polk Street before the merchant association spoke to the police and demanded harsh enforcement and dragoon tactics.
Squirted condiments, pickled chilies.

What also needs mentioning are the often illegal foodstalls once common in Asian cities. Grilled meats on skewers, cheap and chunky goat or pig soup, stinky tofu, and, famously, lapsap min (垃圾麵 "garbage noodles"). That last are, nowadays, instant noodles of whatever flavour augmented by meat scraps from the refrigerator and a vegetable, maybe a fried egg on top, and a splurt of whatever condiment you fancy. For instance chicken noodles with left-over charsiu slices, some bokchoi or yauchoi, chopped chives or scallion, and hot sauce.
Delicious after a long day or while watching teevee.
See also che jai min.

Everything is better with Sriracha.