FUN FOR THE ENTIRE FAMILY

It's the season for Christmas movies. I would like to nominate The Wasp Woman as an appropriate film for the yuletide. Per Wikipedia: "The Wasp Woman (also known as The Bee Girl and Insect Woman) is a 1959 American independent science-fiction horror film produced and directed by Roger Corman. Filmed in black-and-white, it stars Susan Cabot, Anthony Eisley, Michael Mark, and Barboura Morris. The film was originally released by Filmgroup as a double feature with Beast from Haunted Cave."End cite.

I have not seen the movie. My apartment mate watched it over several nights. It's about a youth restorative serum with an unfortunate side effect. And it sounded thrilling.
Just the ticket for a dull holiday season. Screaming.

You may have heard the music before. 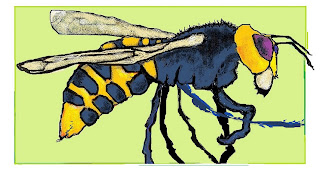 My illustration above had nothing to do with The Wasp Woman, I drew it after murder hornets were discovered in Washington State a while back. Which, according to some people was a nefarious commie plot. Why was not explained.

You'll have to eat your coworkers, though.

It may be a small price to pay.


Most Christmas movies stink. This one doesn't.