THE FUNDAMENTS OF CIVILISED LIFE

As every reader knows, quaint English villages are perfect places to get murdered. Especially when your dotty aunt is in the vicinity. Look for somewhere with a mediaeval church, elderly parishioners and retirees, someone's senile or neurotic relative, and a charming tea shoppe. There's bound to be a weapon from the Afghan wars somewhere, or an entire crate of rat poison. The English seem to love rat poison. It's inexplicable.

I like the English habit of tea in the middle of the afternoon with snackies to fortify one for a long evening of cocktail parties, or sherry in the library, or actually sitting in front of the computer becoming mildly peevish about all the stupidity in the world.
Followed, perhaps, by a nap. 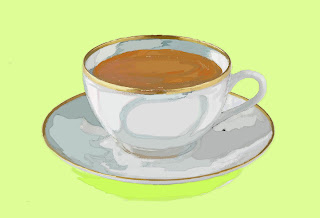 Given that I live in San Francisco, fresh scones with clotted cream, cucumber or salmon sandwiches, and a thick slice of Dundee cake are not part of the programme.

Adrian, who lived in Hong Kong, had access to more English tea time things. But I rather doubt that he ate anything at that time as the wish for a nice smoke outside the building may have trumped the snack urge. Pipe, rain, sheltered area out of the way of foot traffic.
He has returned to England; the pipe and rain are more constant now.

John, who was in HK for several years in his twenties and thirties, never developed a tea habit. Americans seldom do. If you order tea in a bar or restaurant in the United States, what you get is lukewarm water that took ten minutes to get to the mezzanine with all the pints and cocktails, a selection of strange herbal bags, and a thick slice of lemon. I'm guessing that when we dumped the tea in Boston Harbour we didn't let it steep very much.

No idea what Starbucks or other chains do. It's probably awful. I am a little neurotic about my tea. Consequently I will head into Chinatown for a decent cup. Hong Kong style milk tea.
Strong brewed, sweetened and creamed with condensed milk. 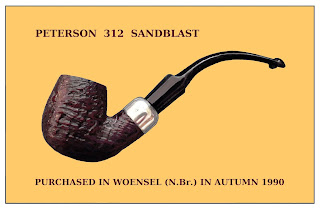 There are no eccentric elderly English people in Chinatown, or crates of rat poison. These staples of British country living are gladly missing. The locals tolerate a Dutch American smoking a pipe. And it seldom rains.