WHEN THERE WERE MONSTERS

One of the words I ran across the other day was a new one for me: 蠪蛭 ('lung jat'). Nowadays it means 'scorpion leech', a multi-headed monstrous semi-canine or lupine creature that sounds like a loud whiny insect and eats babies. The common image shows nine heads. The first character will not have an actual definition in most dictionaries, but is found in the Shuowen and Kangxi, This creature allegedly occurs in the North East.
Sorry, not New England. Perhaps Texas.

There was a day and age when everywhere beyond the settled areas was inhabited by strange and wondrous beings; monsters, warlocks, and daemons.
It must have been fascinating to be a child back then.
Everything was terrifying. 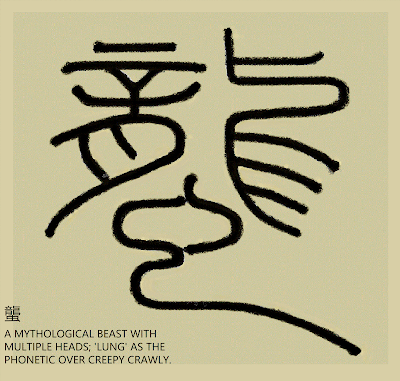 Fortunately those things have become rare.

It is probably worth keeping in mind that alcohol was invented several millenia years ago, whereas caffeinated beverages were discovered barely twelve centuries ago and not commonly enjoyed until the past few hundred years.


Early alcoholic beverages were semi-controlled and haphazard spoilage of grain soups; very probably these had some quite disturbing and unforeseen side effects, especially when people became roaring drunk or woke up with hangovers.
It was a more exciting age.