SAMBAL AND OTHER THINGS

Now that the coming Huy Fong Sriracha shortage is starting to penetrate the consciousness of the wider public -- many of whom only use it very occasionally, when they want their bland Anglo gruel to have a bit of sparkle -- it strikes me that there are some tastes which always remind people of their childhoods and the golden glow of Spring back in the old country. For a Transylvanian or Icelander those things are not worth recapturing. Because they are awful. The phrases "Icelandic bee honey" or "there's golly fish to eat" probably still give some people nightmares, and the less said about the Transylvanian diet the better.

For the rest of us things are mostly excellent. The tastes of "home" may be recaptured with something as delightful and simple as a mustard sauce made with the pan crusties and wine, with a squeeze of lemon juice added. Chopped capers optionally also. Or Thyme. Or Dill. Or a handful of parsley and chives. Or red wine instead of white. Or a pinch of nutmeg. Plus a touch of ground coriander. And a dash thick sweet soy sauce.
Or, in very many cases, sambal.

Of which, of course, there should be several kinds in one's pantry.

[Sambal is any chilipaste preparation. Thick sweet soy sauce (ketjap manis) is both Dutch and Indonesian, originally a Fujianese condiment. Ground coriander is a necessary ingredient. Nutmeg (and mace) make everything taste 'Dutch'.]

Sriracha is a sambal. The same company also makes one or two other splendid items which are actually called sambal. Sriracha is convenient and widely available nowadays, but many years ago it wasn't and a man despaired of civilization ever hitting the raw boring bland primitive whitebread hinterlands. 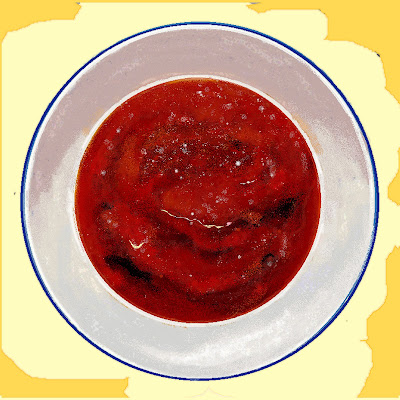 Civilized life in California, Texas, or the North East would be impossible without Sriracha or something like sambal. Of course in Texas it's still impossible, but they do have chilies, so that isn't the problem. The North East has a buggery awful climate, and the rest of the country is filled with Bible thumpers, but California is okay.


While we were living in Holland (we moved there when I was two) there were always two or three large jars of sambal in the reserve in the cellar and the back of the bottom shelf of the refrigerator. My mother, who grew up in a military household on the Presidio, disapproved of the substance (or had just never developed a taste for it), but her lumbago meant that she never discovered it in the refrigerator or past the steep concrete steps downward.

After I returned to the United States I was desperate. What was sambal called in English (it wasn't) and was it available at local foodstores in Berkeley? Those first few months back in the States were rather abysmal. I eventually discovered that there were three shops in San Francisco where it could be found; one out in the avenues, two in Chinatown. West Coast life was still quite primitive in those days (and I remain surprised that people out in the avenues had learned about toilet paper and soap by that time).

When after college I moved to San Francisco I settled near Chinatown, because the easy availability of diverse ingredients spoke to me. To the best of my knowledge, outside of the largely Asian American neighborhoods in the city people are still eating boiled cabbage, possibly with French fries and ketchup, which seem to be their favourite foods.
The spices that they know are salt, pepper, and onion flakes.

At present I am augmenting my Sriracha and sambal stockpile. If I have enough, I may end up trading some of it on the black market for silk stockings, cigarettes, and penicillin.


That thick sweet soy sauce? A substitute can easily be made at home. Standard soy sauce and the same quantity by volume of refined cane sugar, heated up till it becomes syrupy. Add a dash of rice wine or sherry, plus a squeeze of lime juice to prevent the sugar re-crystalizing once the mixture cools.

Most American mustard is, of course, absolutely repulsive.
But decent European mustard may be had.

As for the sambal, good luck!
Y'all have my sympathy.