Remarkable how many people I knew when I walked in. Nodding acquaintances, hello-hello, brief smiles. But considering that it was a restaurant, one very customary greeting would have been ridiculous: "have you eaten yet?" (你食咗飯未 'nei sik-jo faan mei'). That's what they were there for, and in some cases the answer would've been "mmm snarfle nom" or a variation thereof around a mouthful of noodles in an attempt to answer the question.

The only cell-phone conversations while I was there were predictable variations of "oh crap I've just finished lunch I'll hurry on back" and "I'm already here come on down and bring the child". Specifically precisely those two. She handed money to her friend and rushed out, shortly after which a father and urchin came in and joined a woman already seated.

Late lunches. Office persons, and feeding kiddo after school.
Because one can presume that the kiddo is ravous.
Or needs her mood altered. 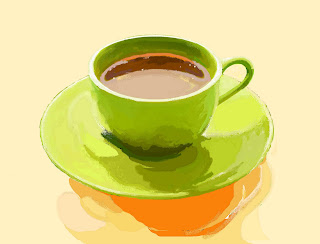 Having putzed around all day I myself had not eaten yet, and needed mood-amending, what with low blood sugar, and the blinkeredness that always results from cooping oneself up; a plate of pork with black bean sauce pepper and garlic over noodles is a legal form of LSD. And smoking a pipe afterwards on Waverly while listening to three gentlemen chatting rectified whatever grumpiness remained.

The German-speaking walking tour across the street didn't understand a word. Given that almost nobody actually understands Swiss-German anyway, that seemed appropriate (it's almost as dense as Schwabian), and I'm sure the tour guide (a normal German-speaker) probably had a hard time understanding their questions also, so three chaps speaking Chinese and a fourth chap being an inscrutable Occidental nearby were just local colour, not nearly as faszinierend und fotowürdig as the signboards and architectural embellishments of the association buildingson either side of the street, ganz wirklich wundersam.

Even during the height of the tourist season, when there are German-speakers all over the city, I have never heard German in a chachanteng. I wonder why that is.
What do they eat? And have they eaten yet?
Es ist doch sehr merkwürdig!


We also have knödel and schweinshaxe here! As well as edible local variations on flädlesuppe and spätzle. It's not ALL Hong Kong variations on sauerbraten!