This blogger is now the happy possessor of a bottle of Glenfiddich. Which is ironic and odd. Because I gave up drinking once I found out it might combine very badly with the medicines I'm on, especially after I ended up with black and blue marks all over my nether anatomy where the catheter thing was inserted when I got a stent. I'm better now. But I didn't want to be seen naked (not that there was any danger of that) for more than a month afterward. They had me on so many bloodthinners at that time that if I was the only human in town a vampire would have starved.

Looked like a bruised corpse from the navel to the knees.
A scrawny slab of badly bruised beef.

So I cut out alcohol entirely. For nearly the next year and a half I was still taking Clopidogrel (standard when a stent is put in), which is an antiplatelet medication necessary so that things don't clog up when the body says "hey what is this thing?"

Which meant that every day after work I'd come home and count the disturbing bruises and oozing scrapes and cuts, because any bump, scrape, or forcefull contact with hard objects or pinchy doors meant no swift recovery. A minor cut which would have been a non-issue before, kept leaking or gushing for days afterward. There was the time I strolled into the bakery on my day off with what looked like a surgical waste dump on the end of my arm, having cut myself the evening before in a very minor accident in the storage area. I had changed bandages four times by then, but my finger was still bleeding like a stuck pig. I was fascinated -- how long is this darn puppy gonna keep barking? -- the three women who worked there were staring like they were seeing a natural disaster wrecking their homes, and because I had posted about this exciting adventure on FB, there was a note waiting for me at work the next day insisting that I tell the doctor forthwith to change my praescriptions from junkstuff ghetto meds to the Rolls Royces of pills. What I was taking caused heart attacks! My doctor was a quack! Someone's brother was a medical man, and had said something!

And I was fascinated by the effect of anti-platelet medication.

[My doctor has gone back to school. My new regular care physician, a charming and capable woman, has seen no reason to change my medications or dosages. I have every reason to believe that she knows what she's doing too.]

After we ended the Clopidogrel, things changed, but I'm still avoiding alcohol. Problem is that I haven't told my apartment mate. Who, it turns out, is fascinated by the shape of the bottle. Triangular. Which means I'll have to empty it. Because I am the drinker. She isn't. 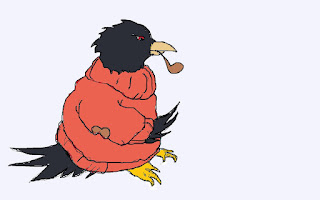 What would be ideal is if a nice woman, with character in her face, of between twenty five and thirty five years of age, would come over on my days off in the early afternoon for a soothing cup of tea and a dramm of Scotch, but we all know that that isn't going to happen.
I am not social enough to know people like that. And the company of pipe smokers sadly is unappealing to the gentler sex, attracting only Tolkien fanboys and Sherlock Holmes nuts. With whom I will share neither tea nor liquor. Because I am not insane.

So the less said about that pipe dream, the better.