When I look at my albums there are several subjects which stand out, and more or less mark me as a compulsive man. Pipes and tobacco (hundreds), food (nearly a hundred), elsewhere places (over sixty), and caffeinated beverages (nearly forty). Plus Chinese mostly seal script calligraphy. Seal script (篆書 'suen syu') is the archaic script style predating the regular script, utilized anciently for records, texts on ceremonial bronze vessels, ownership markings, and, obviously, seals used for signatures, authorship, authority, and possessions. Versions of seal script are still employed for those purposes, and is a fascinating calligraphic style in that with a bit of knowledge one can break apart how certain characters came to be.
Years ago I carved seals, which helped me pay the rent.
Obviously seal script continues to intrigue me.
My own calligraphy isn't exceptional.

Caffeinated beverages are a more decisive marking on my life. Pretty much from my early adolescence till the present I've been fully caffeinated, and every single day includes both coffee and tea. I'm mostly low-level high as a kite all the time.

Lunch today was late-ish, and included tea.
There will be coffee later. 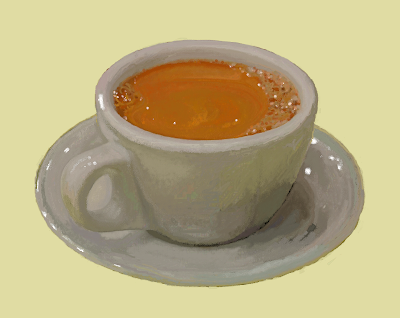 Black tea with sweetened condensed milk. It fuels a man for going up on rickety bamboo twenty storey high scaffolding in a gale, or crash landing a fighter jet in the himalayas.
And other things. A quicker picker upper, so to speak.

Visually the shadings of light and colour on a cheap crockery cup, and the rusty red hues of the beverage itself, are something that I must paint. Ovals, swirls, gradations. For me these are comfort inducing, thought inspiring.

I suspect a psychologist would have a field day with that.

Pipe paintings were a great way to maintain my sanity during the height of the pandemic, and still are. Like most neurotic people I collect things without actually thinking about it, and have ended up with several briars which are now treasured possessions, often enjoyed.
The pages of this blog are littered with those pictures.

I've also ended up with around three dozen nice teapots.
For some reason I've never painted any of them.
I find this hard to explain. 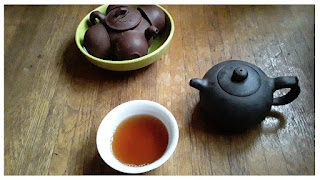 It might be guilt because I don't use all of them often enough.
Perhaps I'm hesitant about getting too stimulated.
I'm probably crazy enough already.