Oriental tobacco: Turkish type, small leaf (basma, djubec, Yenidje, Samsoun, yakka, and Smyrna, also called Izmir, et autres); Latakia (Syrian shek el bint, or Cyprus leaf grown from Smyrna seed stock). There was also Shirazi (Persian) tobacco, but it hasn't been part of the programme for generations. Egyptian cigarettes, often called 'Oriental', used mostly Turkish leaf because tobacco takes so much out of the soil that after a few crops you can write off that field for the next decade or so (leading to a long-standing ban on growing it in Egypt).

[Kyriazi Frères in Souq al-Tawfiqiya in Cairo made some exceedingly nice "Egyptian" cigarettes.]


Most tobaccos grown in Asia are either Virginia or Kentucky (Burley), neither of which are known as 'Occidental'. They're not called 'Oriental' either; that is stricty speaking Turkish and Latakia (although the crops from Greece are also considered 'Oriental'). Russian tobacco is any one of the types mentioned above, OR mahorka, which is cheap, nasty, and strong.

The Vietnamese are pretty much the only people to have developed an affection for Nicotiana Rustica, btw, which is native to North America. Everyone else smokes Nicotiana Tabacum (originally from the West Indies), which is grown world-wide now.

Balkan Blends of pipe tobacco (developed in London over a century ago) consist of Virginia (nowadays often from Africa or even Brazil), Orientals (Turkey or Greece), and Latakia (nowadays from Cyprus). Just something for sensitive people to further get their knickers in a twist over, but good luck finding a pipe smoker to scream at; we're good at hiding in this day and age, and tend to tromp the moors by ourselves or skulk furtively in dark alleys.

Cigarettes for a long time were English (Virginia), American (Virginia and Burley), Oriental (Also called Turkish), Egyptian (using Turkish tobacco), French (shitty tobacco originally from Syria), or Russian (papirosa) of which the most famous still extant brand is Belomorkanal. Most papirosa used Mahorka, and in consequence were real lung-rippers. 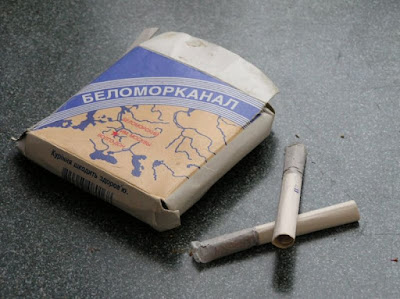 The reason for this post is severely raised eyebrows over the term 'Oriental'.
Which to someone who knows tobacco actually means something.
Otherwise, it's just geographic.
East.

Maryland tobacco (now mostly grown in Italy) is so clean and pure that it was considered suitable for children. I don't think that advertising campaign is still around. Very sad.