SUCH BRAVERY, SUCH MANLINESS!

One day ago I had not heard of Tangshan (唐山 'tong saan') in Hebei (河北 'ho pak'). Per Wikipedia: "Tangshan is located in the central section of the Bohai Economic Rim, facing the Bohai Sea to the south. Lying on the North China Plain, Tangshan is adjacent to the Yan Mountains to the north, borders the Luan River and Qinhuangdao to the east, and to the west and southwest borders Tianjin. Because of its location in the northeast of Hebei, it is a strategic area and a corridor linking two China's north and northeast regions.
The largest river in the prefecture is the Luan River."
End cite. 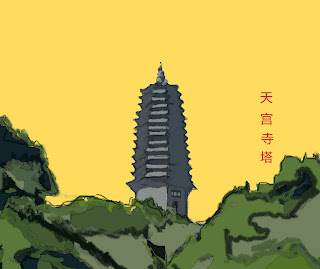 A MONUMENT TO THE MASCULINITY OF TANGSHAN MEN

But of course, Tangshan is mainly known outside of China for the fact that nine men were arrested for assaulting four women dining together at one of Tangshan's barbecue restaurants this past Friday. Because of course, Hebei.

Hebei is a fascinating place filled with chickenshit men who lack civilization.
It is not worth visiting, and other than barbecue, there is nothing to eat.
As far as education is concerned, it's down around Mississippi.
I do not wish to visit Hebei. Life is far too short.