WAITING FOR THE TRAINS

Woke up from dreaming of soto ayam at that restaurant near the transtation. Fragrance. Soto ayam in their hands was a mild curry chicken broth with coconut milk added, chunks of dark meat chicken, rice stick noodles, fried potato cubes, garnished with kuchai (韭菜 'gau choi'; bieslook, garlic chives) and fried onion slivers. I am certain there was also basil in it. At least when I make it at home there is, along with a whole jalapeño chili or two floating in the broth for fragrance. Plus a pinch of nutmeg.

Their opor ayam was also a specialty.

In either case, instead of lontong, a crusty bread roll. For dipping.

Basically the breakfast of champions, if you were heading to Amsterdam. After eating you'd pay, light up a cigar, and get a cup of strong milk coffee at the trainstation at the stand on the platform, then board the intercity. It is unlikely that teenage boys still do that; for one thing, smoking in trainstations is now no longer possible. You could be thickly covered with snow or wet with sleet at the far end of a windswept perron, miserable and soggy, but if you light up, you will get cited ("proces verbaal"), because a triggered wheat germ freak who remained nice and dry near the stairs two hundred feet away reported you.
The dictats from Brussels. Must. Be. Obeyed.

It is manifestly much healthier for you to not be smoking a cigar while wet and freezing with squelchy socks. And besides, instead of chicken, which is sentient and has feelings, you should be eating tofu. 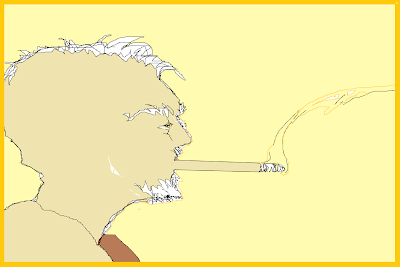 So naturally my first smoke while I was striding across the sundrenched Saharan sandwastes of Nob Hill this morning was a cigar instead of the usual pipe.

I remembered a classmate who rode horses, as well as a long summer afternoon train trip to the end of Walcheren. Sunlit day, slow train. On the way back an English family was happily singing Que Sera Sera in the next compartment. Krul tabak (coarse curls of rough leaf) in my pipe (which looked rather remarkably like the pipe illustrated below), newspaper unread, waiting for the coffee cart to finally trundle near.

And hoping that there would be a snack and hot beverage left.
That pipe tobacco has been unavailable for years.
You can buy the Delft jars on e-bay.
It used to be common.


The krul tabak was basically cheap cigar leaf cut for the pipe, steam-cured a bit to be softer and sweeter. Rather like Nicaraguan, but it had a nuttier resinous taste. Strictly low budget.