AN ORC WITH A PIPE

My apartment mate has casually requested that I do a painting of the salt flats, seeing as they frequently occur in conversation around this household. I said that it has already been done by Edward Gorey. Along with the abandoned glue works out near East Gorth. To which she responded that we don't have access to that illustration. Which is true. And it got me thinking that correct illustrations of Tolkien's Lord Of The Rings should have corpses everywhere. Hobbits. Orcs. Elves. Wizards. Middle Earth smelled depraved.

At six in the morning, from a northern point on Nob Hill, the hills of Marin County are visible. And it's far enough uphill that there are very few dogwalkers or sleeping street people.
Even insane joggers and exercise freaks are very rare.

I had of course gotten up at an ungodly hour because I needed to pee, having forgotten to do so before I retired last night. So, pills, coffee, clothes, and out of the house for a smoke.
After getting off the bus at Jones, walk north.
Light up away from the wind.
Sunlight. 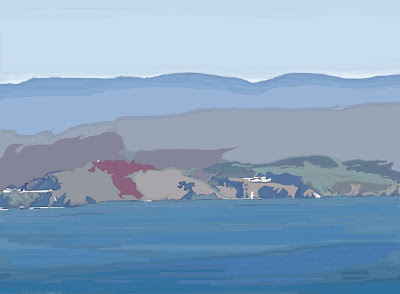 It's not that cold at that hour, but my finger tips felt numb unless I kept them in my pockets. One of the other pipe smokers I know says that when it's cold one can keep the hands warm with a pipe, but I don't think he's ever tried that, seeing as he has all his pipes and has never spoken of a burn-out. If the pipe is hot enough to comfort the fingers, you are doing it wrong. Puff slow. It's okay if the beast threatens to go out, you can always touch up with another lucifer if necessary. 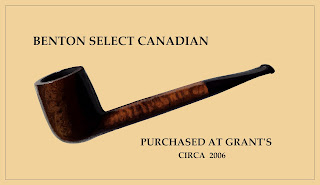 While I was outside, a young lady walking her dog smiled at me. Which is both pleasing, and unusual. In this city most people dislike smokers, but perhaps I come across as a likeable old fossil, and the bright sunlight may have softened my grouchy appearance. I should mention that I had already had a strong coffee, she may have already had a cup also, and both of us wear glasses. So there were multiple factors in play which affected perception either side.


When I returned home, my apartment mate was eating toast and reading the news.
Time for a second cup of coffee, and contemplate a shave and shower.
Then light up again once she's left.


I have tried reading Lord Of The Rings.
It's very long. And not that good.
No mention of salt flats.
A flaw, I think.