Apparently, Prince Andrew can't sweat, because a rush of adrenaline during the Falklands Campaign left him unable to. That, at least, is the claim which his lawyer or legal team is now pushing with a straight face. Very well then, I shall now assert that due to the trauma I suffered during my sixteen years in Holland I'm unable to fart. It's utterly impossible. I have tried.
I wish to smell just as much as normal Americans, but I cannot.

Also, I couldn't have farted. I'm a helicopter pilot and war hero.
I was wounded by a jezail bullet during the Afghan war.
I left my spleen on the desert sands.


At least during the Victorian Era, prominent families could detail their more dysfunctional members to join the clergy. Where perversion was expected of them. Imagine Prince Andrew as Mr. Collins in Pride And Prejudice. A kinder and more gentle member of royalty.
Everybody's favourite dreadful bore and skeevy dingus.
Padre Randy Pants. 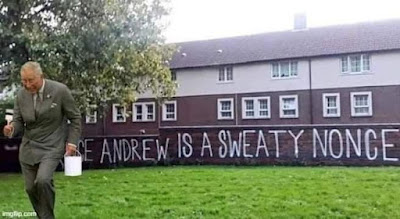 PICTURE STOLEN FROM AN IN DEPTH REPORTAGE BY A SERIOUS FLEET STREET
NEWSPAPER THAT USUALLY REPORTS ON BANKS AND INSURANCE COMPANIES.


The British royals seem to be letting the side down.

Last time this happened, it was Jack The Ripper.


It looks like other than the Scandinavians and the Swiss, in Europe only the French are normal sexually (strike that; Dominique Strauss-Kahn). The Germans have cannibalism, the Dutch and Belgians bestiality and bondage, the English are all Roman Polanski. The Irish, Scottish, and Welsh are into turnips or potatoes. And I shan't even mention the Spanish and Italians.

It's that beastly climate, and the chronic alcoholism of the entire region.